Bottomfishing off the Oregon Coast has become increasingly popular in recent years, and this trend continued in 2019 when 100,000 angler trips were reported.  This newsletter provides a summary of Oregon’s 2019 sport bottomfish fishery.

Bottomfish, or groundfish, refers to several groups of fish that are generally associated with the bottom. Off of Oregon, this includes about a dozen species of rockfish, half a dozen types of flatfish, lingcod, cabezon, greenlings, sablefish, and skates and rays. Test your identification skills with the “Common Bottomfish” online quiz.

Bottomfish Identification:  How and Why

With all of those species of fish, it can be difficult to know what you have caught.  The ODFW website and coastal offices have a variety of tools to help anglers with fish identification including:  rockfish identification tips, rockfish species information, a “yelloweye rockfish or not?” online quiz, flatfish species information, “what can I keep and how many?”, and common groundfish species.   Correctly identifying your catch allows you to accurately report which species you’ve caught and released to the ODFW dockside sampler.  It’s also important to know your fish ID so that you’ll know if the fish you’ve caught is legal to keep and/or meets minimum size restrictions.

Lingcod (Ophidon elongatus) is the largest member of the greenling family, growing up to 5 feet long and 70 pounds.  They are dark gray, brown, or greenish on the back with some colored spotting along the sides and upper back.  The head and mouth are large with 18 sharp teeth lining the mouth.

Similar to cabezon, once females lay the eggs, it is the males that guard the nests for 8 to 10 weeks until the eggs hatch.   Also similar to cabezon, some individuals may have flesh that is blue or green in color.  The color comes from a bile pigment called biliverdin, but how the pigment gets into the flesh, and why only some fish turn color is still a mystery.  The meat turns translucent white when cooked, and is safe to eat.

Lingcod is considered a smart food choice because it is sustainably managed and harvested.  The most recent stock assessment estimated the population to be at a little over 65% of unfished biomass (anything over 40% is good).  In recent years, catches from all fisheries combined (commercial, recreational, tribal) have averaged less than 20% of the biologically allowable catch.  Many lingcod fisheries are limited by restrictions put in place to avoid yelloweye rockfish.

2019 again had high bottomfish effort, with approximately 100,000 angler trips (defined as one angler fishing one day) which is just under the average number since 2015.  Prior to 2015 the average number of bottomfish trips was around 80,000 annually.  The increase in bottomfish trips is due to a combination of factors including:  (1) how the salmon season is going; (2) what offshore albacore tuna opportunities there are; and (3) the general state of the economy and price of gas.

In 2019, the catches of nearshore rockfish species (China, copper, and quillback rockfish) exceeded the quota by mid-August.  Therefore, retention of those three species was prohibited beginning on August 23, for the remainder of 2019.

Due to the increased yelloweye rockfish allocation and the catches of black rockfish being quite a bit below the quota, the sport bottomfish fishery depth restriction was relaxed on September 3, almost a full month early.  Going to all-depth earlier also helped to reduce bycatch of cabezon and nearshore rockfish species after they were closed.

To measure effort, ODFW has video cameras in most ports that record boats leaving and returning across the bar.  The total number of recreational fishing boats counted (and anglers onboard) equals total effort.  ODFW samplers collect catch rate information by interviewing a portion of boats returning to the docks to get information on how many people fished, what species and how many were caught and released, as well as collecting the length/weight of the fish kept.  The total catch is estimated by multiplying the number of anglers by the catch rate.

Other calculations and expansions may be needed to estimate catch for unsampled ports and times, but that is generally how total catch estimates are calculated.  Additionally, these calculations are done separately for private and charter vessels.

ODFW in Action: Onboard Charter Observers

If you take a bottomfishing trip on a charter vessel, you may see someone with measuring equipment and a handheld tablet on the vessel.  To help get biological information on the species and size of fish discarded at sea, ODFW uses onboard charter observers.  Currently there are three of these samplers in Oregon; and while their clothing says “Pacific States Marine Fisheries Commission,” they are collecting data for ODFW.

These samplers aim to observe 100 charter bottomfish trips each year, spread along the north, central, and southern Oregon coast.  Samplers will track all of the fish landed and discarded for a portion of the anglers on each drift.  Fish to be discarded are identified to species, measured, and then released back to the ocean.  This provides biological data on fish not brought to shore that helps to inform fisheries management and stock assessments.  When they’re not working at sea, these samplers work on the docks to collect age structures from recreational catch, which also helps inform fisheries management and stock assessments.

This work would not be possible without the cooperation of the charter captains and crews allowing our samplers to ride along.

For most recreationally important species, there is a federal or state specified annual quota (there are separate quotas for commercial fisheries).  This is the amount of fish ODFW works with to set season structures and bag limits.  Exceeding quotas could lead to overfishing or have an impact on other fisheries. Note that lingcod does not currently have a quota in Oregon’s recreational fishery because all fisheries combined (commercial, recreational, tribal) are taking far less than the total allowable amount for the West Coast north of Cape Mendocino, CA, due to restrictions necessary to minimize yelloweye rockfish bycatch.

The black rockfish quota declined slightly for 2019, from 2018.  Until there is a new federal stock assessment (likely in 2023) the quota will remain similar to 2019, or decrease slightly each year.  The yelloweye rockfish bycatch quota more than doubled for 2019, from 3.0 mt to 7.1 mt, because the population size has improved.  Although the improvement was not large enough to allow anglers to keep yelloweye rockfish, it did allow some regulations designed to avoid yelloweye rockfish to be somewhat relaxed.  The cabezon quota will remain the same for 2020, and increase very slightly beginning in 2021 thanks to a new stock assessment.  Canary rockfish and kelp greenling both have decreases, however recent years’ catches have been under those quota levels.  New in 2019, blue and deacon rockfish were removed from the Nearshore Rockfish Species group.  The 2019 quota for the remaining species in the Nearshore Rockfish Species group (China, copper, and quillback rockfish) was similar to 2018.

Rockfish have a swim bladder, a gas-filled organ that helps regulate buoyancy.  The gas in the swim bladder expands when a fish is brought up to the surface, resulting in barotrauma.  Signs of barotrauma include:  swollen body, stomach and/or esophagus extending out the mouth, and/or bulging eyes.  Because of the extra buoyancy from the expanded gas, some rockfish may not be able to swim down from the surface on their own.

Research has shown that rockfish released near the depth of capture have a higher survival rate.  The Pacific Fishery Management Council (PFMC) incorporates this into management for some species.  For yelloweye rockfish, releasing at depth has helped prevent additional fishery restrictions and reduced the chance of a recreational fishery closure due to bycatch.

ODFW Marine Resources Program research staff have received funding to conduct a coastwide combined acoustic and visual survey of black, blue, and deacon rockfish.  The survey will not give total numbers (abundance) of those three species, but will provide valuable information on the scale of the populations that will help inform future stock assessments.  ODFW has conducted successful test surveys using these methods in several local areas.

The results of the coastwide survey work are expected to help in ensuring that the next black rockfish assessment (2023) is more robust than the previous one.  ODFW successfully obtained grant funding from NOAA Fisheries via a Saltonstall/Kennedy Grant to develop and test the methodology, and won approval from ODFW’s Restoration and Enhancement Board for additional funds to conduct the survey.

Bottomfishing is good for the Oregon economy 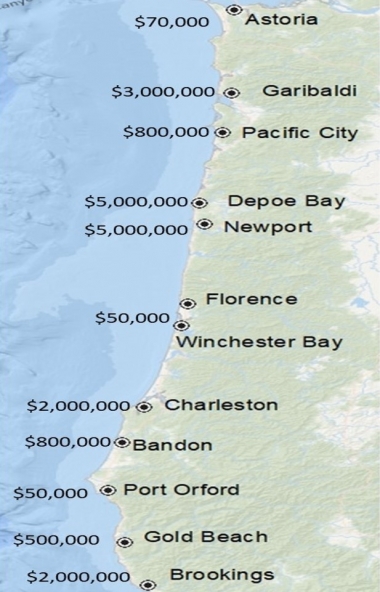 The continued high number of bottomfish trips in 2019 has been good for the economy of Oregon.  Overall bottomfish trips, charter and private trips combined, contributed approximately $17 million to the Oregon economy through fishing related expenditures such as gas, bait, gear, moorage, restaurants, and hotels.  This translates to approximately the equivalent of 370 full-time jobs.  Anglers fishing out of Newport and Depoe Bay had the most effort and highest economic contribution, with around $5 million and $4 million, respectively.  Anglers fishing out of Brookings and Garibaldi contributed between $2 and $2.5 million dollars from each port.  Even in smaller ports with lower absolute economic contribution numbers, the contributions can be large relative to other local economic activity, and are very important to coastal communities.

The Oregon State Police Fish and Wildlife Division’s Marine Fisheries Team helps ODFW by enforcing fishing regulations.  They patrol both on land and at sea to ensure that fishing regulations are followed.  Regulations are in place to keep fisheries sustainable, and enforcement of regulations is a key piece to the overall management.  Common issues encountered are:  fishing without a license, exceeding the bag limit, retaining prohibited species (e.g., yelloweye rockfish) or undersized fish (e.g., lingcod or cabezon), and fishing in closed areas (e.g., Stonewall Bank Yelloweye Rockfish Conservation Area).

Looking Ahead & How to Get Involved

The Oregon Fish and Wildlife Commission will finalize the 2021 sport bottomfish season at its meeting in December 2020.  ODFW will be asking for your input on the 2021 season at an online meeting in late July or early August (date TBD).  See the Sport Bottomfish Webpage for more information.

The Pacific Fishery Management Council process to set up allocations and fishery regulations for 2021-2022 began in 2019 and concluded in June 2020.  During the summer of 2019 several stocks were assessed; the most important one to Oregon anglers being cabezon.  Starting in September of 2019, the Council began the process of setting the harvest limits and developing management measures to stay within those limits.  At the summer 2019 public meetings, ODFW asked for input on the 2021-2022 seasons. The Council’s Groundfish Management Team (ODFW has 2 members) spent the winter doing the analysis necessary to inform the Council’s decisions.

At its June 2020 meeting, the Council finalized all of the allocations, season structures, and regulations for 2021 and 2022.  At each Council meeting, there is an opportunity for public input.  Information on how to provide input to the Council can be found on the Council’s website:  https://www.pcouncil.org/.