Bottomfishing off the Oregon Coast has become increasingly popular in recent years, and this trend continued in 2020 with more than 103,000 angler trips reported. Here is a summary of Oregon’s 2020 sport bottomfish fishery, a season like no other due to the pandemic.

Bottomfish, or groundfish, refers to several groups of fish that are generally associated with the ocean bottom. Off Oregon, this includes about a dozen species of rockfish, half a dozen types of flatfish, lingcod, cabezon, greenlings, sablefish, skates and rays, along with three species of sharks. Test your identification skills with the “Common Bottomfish” online quiz.

Bottomfish identification: How and why

Correctly identifying fish is important for following species harvest and size regulations, and to accurately report species caught and released to the ODFW dockside sampler. It is also important to know your fish ID to avoid keeping an illegal fish.

January: For the first time in 20-plus years, there was zero estimated ocean bottomfish effort or landings. Wind and waves kept most ocean access bars closed or restricted.

March: Effort picked up mid-month with good weather but lessened when COVID restrictions were then put in place, and many recreational public facilities, ports, charter operations, and public facilities were closed or reduced.

April: Some south coast facilities and businesses began limited reopening; those on central and north coast remained closed. There was some effort and landing by anglers with private vessels with reserved slips or access to private facilities coastwide.

May: Most public facility closures/restrictions were lifted. Charters reopened with limited clients. Bottomfish catch effort and landings began to rise.

Summer: As the summer progressed with many indoor activities restricted, many people turned to the great outdoors as an outlet seeking activities such as hiking, bird watching and fishing, some for the first time. 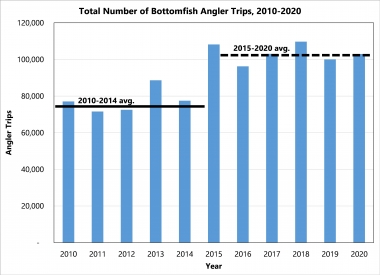 Even with the slow start and the spring restrictions, 2020 had the third highest number of bottomfish trips (103,000), continuing the trend that began in 2015 of approximately 100,000 bottomfish trips per year.

Prior to 2015 the average number of bottomfish trips was around 80,000 annually. 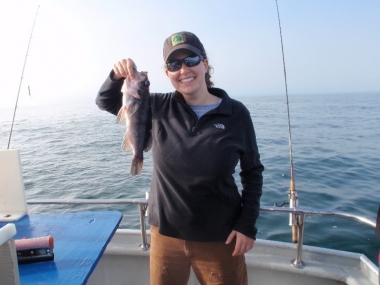 The catch of nearshore rockfish species (China, copper, and quillback rockfish) attained the quota by mid-July. Beginning July 20, retention of these species was prohibited for the remainder of 2020.

The cabezon quota was reached very quickly again in 2020. In just six weeks anglers caught more than 4,700 fish (13.7 mt). This may be partially due to a large 2013-2014 year class of cabezon which have now reached legal-size for retention (16 inches).

Due to the catch of black rockfish being quite a bit below the quota, the sport bottomfish fishery daily bag limit was increased from five to seven fish per day on July 20 through the remainder of the year.

To measure effort, ODFW has video cameras in most ports to count boats leaving and returning across the bar. The total number of recreational fishing boats counted (and anglers onboard) equals total effort.

ODFW samplers collect catch rate information by interviewing a portion of boats returning to the docks. Samplers document number of anglers, species fished for, the number caught and released, and collect length/weight of fish kept. The total catch is estimated by multiplying the number of anglers by the catch rate.

Other calculations and expansions may be needed to estimate catch for unsampled ports and times, but that is generally how total catch estimates are calculated. Additionally, these calculations are done separately for private and charter vessels.

For most recreationally important species, there is a federal or state specified annual quota (there are separate quotas for commercial fisheries). This is the amount of fish ODFW works with to set season structures and bag limits. Exceeding quotas could lead to overfishing or have an impact on other fisheries. Note that lingcod does not currently have a quota in Oregon’s recreational fishery because all fisheries combined (commercial, recreational, tribal) are taking far less than the total allowable amount for the West Coast north of Cape Mendocino, CA, due to restrictions (e.g. seasonal depth restriction) necessary to minimize yelloweye rockfish bycatch.

The 2020 black rockfish quota was the same as last year. Until there is a new federal stock assessment (likely in 2023), the quota will remain similar to 2019 or decrease slightly each year.

The 2020 cabezon quota was the same as last year, and will increase slightly beginning in 2021 thanks to a new stock assessment. Canary rockfish and kelp greenling both have decreases, however recent years’ catches have been under these decreased quota levels.

The 2020 quota for the species in the Nearshore Rockfish Species group (China, copper, and quillback rockfish) was similar to 2019, but will decrease somewhat for 2021.

Bottomfishing is good for the economy

The continued high number of bottomfish trips in 2020 has been good for the economy of Oregon. Bottomfish charter and private trips combined contributed approximately $17 million to the Oregon economy through fishing related expenditures such as gas, bait, gear, moorage, restaurants, and hotels. This translates to approximately the equivalent of 370 full-time jobs. Anglers fishing out of Newport and Depoe Bay had the most effort and highest economic contribution, with about $5 and $4 million, respectively. Anglers fishing out of Brookings and Garibaldi contributed between $2 and $2.5 million from each port. Even in smaller ports with lower absolute economic contribution numbers, the contributions can be large relative to other local economic activity, and are very important to coastal communities.

The Oregon State Police Fish and Wildlife Division’s Marine Fisheries Team helps ODFW by enforcing fishing regulations. They patrol both on land and at sea to ensure that fishing regulations are followed. Regulations are in place to keep fisheries sustainable, and enforcing regulations is a key piece to the overall management. Common issues encountered are: fishing without a license, exceeding the bag limit, retaining prohibited species (e.g., yelloweye rockfish) or undersized fish (e.g., lingcod or cabezon), and fishing in closed areas (e.g., Stonewall Bank Yelloweye Rockfish Conservation Area).

Rockfish have a swim bladder which is a gas-filled organ that helps regulate buoyancy. The gas in the swim bladder expands when a fish is brought up to the surface, resulting in barotrauma. Signs of barotrauma include: swollen body, stomach and/or esophagus extending out the mouth, and/or bulging eyes. Because of the extra buoyancy from the expanded gas, some rockfish may not be able to swim down from the surface on their own.

Research has shown that rockfish released near the depth of capture have a higher survival rate. The Pacific Fishery Management Council incorporates this into management for some species. For yelloweye rockfish, releasing at depth has helped prevent additional fishery restrictions and reduced the chance of a recreational fishery closure due to bycatch.

Looking ahead & how to get involved

The Oregon Fish and Wildlife Commission will finalize the 2022 sport bottomfish season at its meeting in December 2021. ODFW will be asking for your input on the 2022 season at an online meeting in late July or early August (date TBD). See the Sport Bottomfish Webpage for more information.

The Pacific Fishery Management Council process to set up allocations and fishery regulations for 2023-2024 will begin in 2021 and conclude in June 2022. During the summer of 2021, several stocks will be assessed. The most important ones to Oregon anglers are lingcod, copper rockfish, and quillback rockfish.  At its June 2022 meeting, the Council will finalize all of the allocations, season structures, and regulations for 2023 and 2024.

At each Council meeting, there is an opportunity for public input. Information on how to provide input to the Council can be found on the Council’s website.