He is an Oregon icon – Herman, the sturgeon, the state’s most famous fish. At 11 ft. long and nearly 500 lbs., Herman is not only one of Oregon’s most distinctive aquatic characters- some even consider him the unofficial state fish.

And why not? Herman has a Facebook page, a line of Herman memorabilia, recently starred in a National Geographic documentary, made a music video with a famous rap musician, and for nearly 50 years was the undisputed star attraction at the Oregon State Fair. 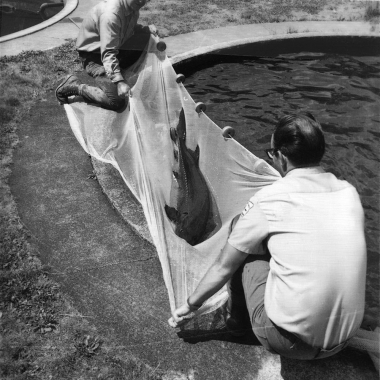 That was before getting his humongous body back and forth to the fair, and keeping him healthy and safe while he was there, became an issue. Just getting Herman onto a fish tanker was a big job. Hatchery workers had to corral him in his pond, lift him up on a wet blanket, carry him to the truck, and slide him in through the gate of a fish tank mounted on the back of a truck. Upon arrival at the fairgrounds, someone had to climb into the tank to get Herman pointed at the back door so he could slide headfirst through the opening onto a wet blanket that was used once again like a sling to hoist him into the pond. Once in the pond, he laid around for 11 days and saw as many as 350,000 fair goers parade through the ODFW exhibit to gape at him.

After many years of taking Herman to the fair, ODFW managers decided the ordeal was causing too much stress on him so the practice was stopped. No one responsible for his well-being regrets that decision. That was 1985. Yet 30 years later, people still remember Herman’s state fair days and continue to ask ODFW staff, “Where’s Herman?”

Steve Williams remembers that question well. Williams is the former number two man at ODFW’s fish division. He sometimes wore ODFW’s sturgeon costume at the state fair and fielded many a Herman-related question. “Where’s Herman? … There is no doubt in my mind that’s the most frequently asked question at the state fair,” said Williams.

Not that there weren’t other important Herman-related questions, too, like, “Was Herman really kidnapped in the middle of the night from his viewing pond at Roaring River in 1983?” Yes he was. “Did thieves really mangle Herman so badly in a failed attempt to pull him out of his pond that workers spent months nursing him back to health so they could release him out in the Columbia?” Yes, that too is true. Sadly, even the story about the man who jumped into the pond with Herman and repeatedly stabbed him with a knife … is true. In fact, Herman and his friends have been assaulted on multiple occasions. In 1969, an unidentified assailant entered the sturgeon pool at Bonneville and stabbed five fish repeatedly. In 1980, one of the sturgeon at Bonneville mysteriously disappeared and was believed stolen. In 1982, vandals took two sturgeons and inflicted a severe cut in another one’s back. In light of these attacks, hatchery workers responsible for taking care of Herman are guarded about any attempts to disturb him anymore.

Toward the end of Herman’s state fair days there was a concerted discussion in Salem at the time about building a permanent aquarium for him at the state fairgrounds. It would have been a grand facility. Features of the proposed $500,000 aquarium included a 60,000-gallon tank, meandering stream, waterfalls, spawning ponds and a viewing window where visitors could get a close look at the big fish. However, that idea eventually fizzled.

In its place emerged another plan to build a first-class, fish-friendly sturgeon holding facility at Bonneville Hatchery next to the Columbia River near Cascade Locks. Oregon Wildlife Foundation, formerly known as the Oregon Wildlife Heritage Foundation, spearheaded a fund-raising campaign and raised more than $350,000 toward the construction of what is now known as the Sturgeon Viewing and Interpretive Center, located at Bonneville Hatchery next to Bonneville Dam. The Sturgeon Center is one of Oregon’s top visitor attractions.

ODFW engineers designed the Sturgeon Center so it would preserve the historical architecture found at Bonneville Hatchery, mostly native stone and vegetation. Thanks to those efforts, Herman is now resting comfortably in the two-acre pond, feeding on fresh salmon, and doing swim-bys for tourists from all over the world who stop in by the tens of thousands to eagerly snap selfies with him to send to friends. It is one of the few places on the planet where people have the opportunity to gaze directly into the eyes of a fish that predates man by millions of years, a modern day dinosaur.

The Sturgeon Center is situated under a forest canopy and has a continuous flow of cool, fresh water. A paved path part-way around the pond provides easy access to a viewing platform where people can get a bird’s eye view of Herman and his companions – smaller sturgeon and some over-sized trout. A covered kiosk just a few steps away has a large viewing window below the water’s surface that lets visitors get nose-to-nose with Herman. The site is ADA accessible and is open to the public year-round free of charge.

So nowadays Herman is kicking back and enjoying the good life at Bonneville. He doesn’t have to hunt or scavenge for food in the bottom of the Columbia River anymore because hatchery technicians bring him a steady diet of fresh salmon. Eight smaller sturgeons – two 8-footers, a 7-footer, and four smaller sturgeons – also live in the pond and keep Herman company. Someday one of them may become the next Herman. That could be awhile, though, because even at age 77 the current Herman potentially has a couple more decades to reign as the state’s oldest and largest captive sturgeon. An older, smaller sturgeon viewing pond has approximately 21 sturgeons in it, all of them less than four feet in length.

There are 23 species of sturgeon worldwide, seven of which that are found in North America with only two species (the white sturgeon, like Herman, and his green sturgeon cousin) found on the West Coast. Some sturgeon live to be more than 100 years old and grow to be twice as big as Herman, who is now approximately 11 feet long and weighs almost 500 pounds.

Herman comes from a long line of prehistoric bottom-feeders. So far this approach has proven an effective survival strategy for sturgeon, which evolved during the Jurassic Period of the Mesozoic Era (100-200 million years ago) when the dinosaurs were still walking the earth. Sturgeon have changed very little since then. They even look like part dinosaur. The prehistoric nature of the sturgeon recently captured the attention of rap music star Aesop Rock, who came to the Sturgeon Center at Bonneville to film a music video with Herman. So, yes, if you have heard Herman is a rock star – that, too, is true.

Though Herman is not coming back to the state fair, people who want to see him can easily do so. The Sturgeon Viewing and Interpretive Center at Bonneville is just 45 minutes east of Portland on highway I-84. It’s a great place to bring the family for a day’s outing. There is abundant parking and admission is free. In addition to vising Herman and his sturgeon friends, visitors can take advantage of the hatchery’s other attractions such as the salmon rearing ponds, visitors’ centers and the spawning room, which is seasonal. Display ponds where people can feed rainbow trout are open year-round. The best time to view adult fall Chinook and Coho salmon is from August through November with spawning viewing in early September and late October.

The Spruce Gifts and Provisions shop is open year round and is owned and operated by Oregon Wildlife Foundation, a non-profit organization. Proceeds from the gift shop are used to benefit Oregon’s fish and wildlife. Neighboring Bonneville Dam has a visitor’s center and offers site tours for large groups.

The Oregon Department of Fish and Wildlife owns or manages nearly 200,000 acres of land set aside for wildlife use...

Share your wildlife sightings through the Oregon Wildlife Conservation project

Join the community scientists who have shared their wildlife observations in Oregon throughout the iNaturalist app. Record your sightings of mammals, birds...

Watch for wildlife on Oregon’s roads and highways

In late September, deer and elk begin their annual migration to wintering grounds, and often have to cross roads and...