How to hunt wild turkey

Wild turkey hunting is the fastest growing form of hunting in the U.S. today. In Oregon, turkey hunting has grown more than ten-fold since a statewide spring season opened in 1987. As more hunters take to the field to enjoy this challenging form of recreation, understanding time-proven techniques and necessary safety aspects of this sport becomes essential. This article will help make your wild turkey hunting experience safe and enjoyable.

Learn how to hunt wild turkey in Oregon 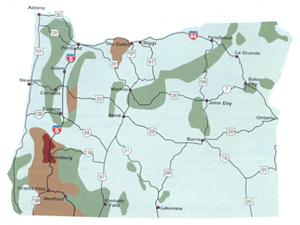 Wild turkeys are not native to Oregon but rather were successfully introduced in 1961. Since then more than 10,000 turkeys have been transplanted to locations all over Oregon. In recent years, these transplants have been the result of moving nuisance turkeys to other parts of the state. Turkey management is directed by Oregon’s Wild Turkey Management Plan adopted by the Fish and Wildlife Commission in 2004.

Two wild turkey subspecies have been introduced to Oregon. The Merriam’s wild turkey was the first subspecies released in the state. Live-trapped wild Merriam's turkeys were received from Colorado, Arizona, New Mexico, Nebraska and Montana. Merriam’s turkey is native to mountainous, woodland habitats from the southwestern United States to central Colorado.

The Merriam’s wild turkey population in Oregon increased rapidly following initial releases and then stabilized at lower population levels after the initial expansion. Few pure Merriam wild turkeys likely remain in Oregon. Most Merriam's turkeys have hybridized with the Rio Grande wild turkeys, first introduced to southwestern Oregon in 1975. Rio Grande wild turkeys are native to riparian (streamside) and scrub woodlands from the southern Great Plains southward into northeastern Mexico. In Oregon, this subspecies has since been established throughout the state and has proven adaptable to a surprisingly wide range of habitat types. Because of this, management efforts have focused primarily on this subspecies since the early 1980’s. Wild-trapped birds have come from Texas, Oklahoma, Kansas and California.

Wild turkey courtship activities begin in early spring. After spending much of the winter in a common flock, toms (mature male turkeys or “gobblers”) disperse, fight for dominance, and begin gobbling and displaying in efforts to attract hens (mature female turkeys). A tom will mate with as many hens as it can attract. Juvenile male turkeys (jakes) strut, gobble and court hens but are often less successful than mature toms unless the number of mature toms is inadequate. Conversely, many yearling hens (especially the Rio Grande subspecies) will mate and nest during their first nesting season. Following mating, which may begin by late February, hens construct ground nests and soon begin laying clutches of 5 to 15 eggs. Nesting success varies from year to year, but Oregon research has shown that approximately 50 percent of nests are lost to weather, predation, abandonment, etc., and from those nests that successfully hatch about half of the broods are lost to weather and predation.

One of the reasons the Rio Grande subspecies has been so successful in Oregon is that hens are prolific re-nesters and will re-nest several times if previous nests are destroyed. During the 28-day incubation period that follows the onset of nesting, a second flurry of tom activity occurs. Gobbling and displaying are done in earnest, as toms attempt to locate unmated hens or hens experiencing nest failure. This second peak of courtship activity coincides with the best time for spring turkey hunting. Gobblers aggressively looking for hens may readily respond to a proficient caller’s yelp.

Because only male turkeys, or turkeys with a visible beard, may be taken during spring season, identification of the sexes is important. Toms weigh from 14 to 25 pounds or more, and typically have a series of hair-like feathers, known as the beard, extending from the breast. The beard is normally 3 to 10-inches long, and to some extent this relates to age. Most toms have spurs on the lower legs. Beard and spur length tend to increase with age. The gobbler’s head is devoid of feathers and sports a bright color combination of red, white and blue. Body feather coloration is the best indicator of turkey sex; iridescent black-tipped breast feathers give the tom turkey its characteristic dark, polished look. Remember also that only toms strut and gobble. During display, the top of a gobbler’s head will be as white as a golf ball, a characteristic lacking in hens.

Hens weigh from 8 to 12 pounds. A small portion (10 percent) of hens have beards. Unlike toms, hens lack spurs and have a few scattered, small feathers on the head and neck. The head is generally a dull gray-blue color, with pink and red coloration minimal or absent. Hens also have body coloration distinctive from toms; the breast feathers have a buff or white tip giving the hen its distinctive buff/brown color. These white or buff tipped feathers often give the breast of the hen a “frosted” appearance.

Finding a place to hunt

Wild turkeys pay no attention to ownership boundaries and can be found on both public and private land. Maps which show land ownership can be the hunter’s best friend when attempting to locate public lands in areas where turkeys are found. Good maps are available from the U.S. Forest Service, Bureau of Land Management, State Department of Forestry and other sources. A section listing map source addresses can be found in the Oregon Game Bird Regulations published annually by the Department of Fish and Wildlife.'

Some excellent turkey hunting can be found on private lands, but developing trust and rapport with a landowner involves an investment in time and commitment on the part of the hunter that should begin long before the hunting season. Hunters who spend the time and have the empathy needed to develop long-term friendships with landowners are usually the most successful at gaining access to private land. These are usually not friendships that begin on opening day and end when the season closes.

The essence of Oregon’s spring wild turkey hunt is to attract a tom to your position by mimicking the sounds of a hen. Your hunting success relies heavily on locating a tom. For this reason, you may want to scout your hunting area before the season begins. Look for signs of recent wild turkey activity, and locate suitable calling locations. Wild turkey sign includes tracks and droppings. Hen tracks rarely exceed 4.5-inches long, whereas gobblers can have tracks up to 6-inches long. Droppings offer positive evidence that wild turkeys have been in the area. The droppings’ shape indicates the sex of the bird. Gobblers leave “J” shaped, elongated droppings, while hens leave rounded, piled droppings.

Once the season opens, arrive at your pre-selected hunting area well before sun-up to be in position before toms begin to stir on the roost. Your calling location should be at least 100 to 150 yards from roosting wild turkeys. Attempts to get closer may spook birds off the roost and spoil your initial hunting efforts (this is where pre-season scouting pays off). Wild turkeys are hesitant to walk through thick brush, so select a calling position in relatively open country. Also avoid cover that restricts your sight path; maintain at least 50 yards of visibility in all directions. Find a tree that is wider than your shoulders and taller than your head to sit against. This will break up your outline and protect your back from a careless hunter who may be stalking you. Wild turkeys possess a well-developed sense of hearing and acute vision. For this reason, you should remain motionless while calling. You might consider taking a cushion to provide more comfortable sitting on cold or wet ground. Dressing in camouflage from head to toe is also recommended. Some wild turkey hunters even wrap their shotguns in camouflage tape to prevent gun barrel glint from giving away their position.

Once in place, sit quietly for a few minutes and listen for wild turkey activity, including wing flapping and soft calls. Remain motionless and begin calling softly and infrequently. Loud, aggressive calling may attract a gobbler, but may also cause him to avoid the area. Only experience will help you determine when, how loudly and how often to call. Good audio tapes are commercially available to help improve your calling. If a tom responds, call less often and watch for the gobbler. Calls may also attract a curious hen. If this happens, do not frighten her away; her presence will give any incoming gobbler more confidence.

The gobbler may call from a distance, then approach quietly. Remain still and be patient; the bird may circle before coming in from another direction. Scan the area in front of you, being careful to minimize your movement.

During your hunt, you may need to change calling locations. Do not be too eager to do this, particularly if the wild turkey you have called has been silent; it may be coming your way. If you do move, do not attempt to stalk the bird. Pick a new calling location and proceed as before. Be alert for other hunters in your area.

Because wild turkeys are tough to bring down, call your bird to within 25 yards before attempting a shot. Positively identify your target, and be certain you have a safe backstop. Wait for the turkey to extend its head and neck, then aim for the base of the head. Shooting for the body will often only wound the bird; dense feathers and heavy muscle and bone structure protect vital organs. After firing, set your gun’s safety and quickly approach the downed turkey. Be cautious of slashing spurs and beating wings.

Tag your wild turkey immediately and don’t delay too long before dressing it out. To do this, open the body cavity from just below the breast to the vent. Remove internal organs and allow blood to drain from the body cavity. For safety, place your bird in a sack or cover with hunter orange wrapping when carrying it from the woods.

In Oregon, a shotgun or hand-held bow are the only legal weapons for taking wild turkeys. It is unlawful to hunt wild turkeys with shotguns larger than 10 gauge or smaller than 20 gauge or with shot size larger than No. 2. Best shot sizes are 4, 5 or 6 depending which gives the best pattern from your gun. Recurve, long and compound bows may be used. Consult current turkey hunting regulations for additional details.

Because turkey hunting involves camouflaged, stationary hunters who are imitating a hen’s call, turkey hunting is potentially dangerous. Fortunately, few accidents associated with turkey hunting have occurred in Oregon. Keeping these points in mind will help you have a productive and safe wild turkey hunt:

Where to hunt game birds

A beginner's guide to waterfowl hunting on Sauvie Island - hunting in the North Unit. Part 4 of a 5...

Get your permit to hunt goose in the northwest corner of Oregon- part of the Pacific Flyway for migrating waterfowl.

Check out the Recreation Report

Current conditions and opportunities to hunt, fish and see wildlife. Updated weekly by fish and wildlife biologists throughout the state.