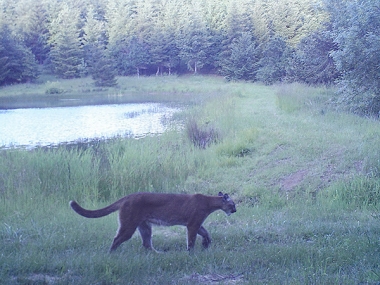 Any person hunting cougar must have on their person a valid adult hunting license for the current year and a General Season Cougar Tag and/or an Additional Cougar Tag. Cougar tags must be purchased by the deadline which is usually the day before Western Oregon general rifle deer season begins. An additional tag may be purchased throughout the season; however, hunters must purchase the general season tag prior to the deadline to be eligible for the additional tag.

No person shall use dogs for the taking or pursuit of cougar. Permission is required to hunt on privately owned land. Any cougar taken must be presented at an ODFW office within 10 days of the kill to be checked and marked. Hide and skull must be unfrozen when presented for check-in. Please call ahead to make an appointment to have cougar checked. Check-in must occur during normal business hours (Mon. - Fri., 8-5). Hunters are required to check in the hide of any cougar taken, with skull and proof of sex attached, and submit the reproductive tract of any female cougar taken (pdf).

Oregon has about 6,000 cougars statewide, up from an estimated 200 in the late 1960s. Cougars are found in all suitable habitat in Oregon and their population is very healthy. The recovery of cougars from their once-low numbers is a conservation success story for Oregon. However, with higher numbers of these predators comes increased conflict. Cougars can kill livestock and family pets. Sometimes, they linger around residences during the daytime or stop showing fear of people—behavior that concerns wildlife managers.
Cougars are also affecting Oregon’s big game (deer, elk, bighorn sheep) populations, which are well below desired levels in some parts of the state. While a number of factors have caused their decline, research within Oregon has shown that cougars can have a significant impact on deer and elk populations in some areas.
To address these problems, the 2006 Oregon Cougar Management Plan created a tool for wildlife managers known as a “cougar target area.” This is an area where ODFW staff or agents reduce the cougar population over a three-year period. Each area has an annual quota, and ODFW staff or agents can remove cougars of any age or sex up until that quota is reached.

When does ODFW start a cougar target area?

Several factors can trigger a target area including the number of cougars being killed for livestock damage or public safety concerns in the area (indicating a high level of conflict once it reaches a certain threshold) and deer and elk populations falling below management objectives. These factors are outlined in the Cougar Management Plan. ODFW typically chooses three to four target areas at a time.

What are the cougar removal quotas and goals for the 2016-19 cougar target areas? 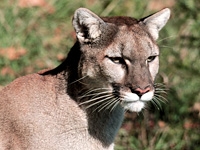 Who can kill cougars in these areas, and by what methods?

ODFW, USDA Wildlife Services, or volunteer agents can remove cougars using trained hounds or traps. Volunteer agents must undergo background checks and training before doing any cougar removal work for ODFW and are not permitted to keep the carcass. Cougars that are removed are taken to ODFW offices so staff can collect sex and age data.

Since the passage of Measure 18 by Oregon voters in 1994, using dogs to hunt cougars has been unlawful, and it remains so. Measure 18 did allow ODFW to appoint agents with hounds to respond to livestock damage, public safety situations, or other official cougar management actions. Hounds are an indispensable tool in cougar management because these specially-trained dogs can pick up and track a cougar’s scent.

What’s to stop ODFW from removing so many cougars that it harms the population?

ODFW closely tracks all cougars killed in Oregon. Sporthunters and landowners must check in the carcass of any cougar they kill within 10 days so ODFW can track its age and sex. Should the number of cougars killed exceed a certain threshold, ODFW would end all sport hunting and cougar target area removals for the rest of the season (until Jan. 1 of the following year). Cougars could still be removed if a damage or safety situation arose.

Since 2006, ODFW has completed about 10 cougar target areas across the state, and in most cases has achieved the desired effect. Elk calf survival doubled in Ukiah Unit and Heppner’s elk population increased. Livestock conflict decreased in the Beulah Unit. A change in mule deer populations was harder to detect, but hunter success rates and the number of older bucks taken by hunters both increased in Steens Mtn. and Warner where cougar target areas were in effect from 2012-15.

While cougar population density within target areas has been reduced for a time, the number of cougars within each zone and statewide has continued to grow.  Research conducted in Oregon has indicated these populations are resilient and recover rather quickly from these targeted removals.

When will you know if the cougar target areas worked?

After three years of removing cougars, ODFW will assess whether or not the cougar target area had the desired effect and report these results to the Fish and Wildlife Commission in a public meeting.

Points to remember while hunting in target areas

How to read a point summary report

This example will show you how to read a point summary report.

The Oregon Disabilities Hunting and Fishing Permit is not a license or tag. Hunters must still obtain a hunting and/or...

How to hunt rabbit

Rabbit hunting is the third most popular type of hunting activity in the U.S., behind wild turkey and deer hunting....