Leave young wildlife in the wild

Young animals are rarely orphaned, so leave them where you find them. Chances are good mom is nearby, just waiting for you to leave before she returns to her baby. Leaving young wildlife where they are is the right thing to do, picking it up and taking it home is illegal. 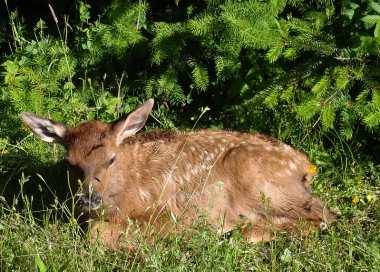 In spring and summer, you might come across a fledgling bird on the ground, a deer fawn or elk calf hidden away in grass, or even a seal pup by itself on the beach. And naturally, your first instinct will be to “help” the animal by picking it up and taking it home or to a wildlife center.

But these young animals aren’t actually orphaned. The bird is learning to fly and the young deer or elk has been hidden there by its mother to protect it from predators while she is off feeding.

But each year, well-intentioned people mistake an animal by itself as permanently abandoned or orphaned and remove it from the wild to "save" it. Instead, this action drastically reduces the animal’s lifespan.

An animal removed from the wild misses the chance to learn where to seek cover, what to eat and how to escape from predators and other dangers—behaviors that humans who raise wildlife, even in the best circumstances, cannot teach.

When wildlife biologists get the call that someone has picked a young animal up, the advice is always the same: Put it back. The best thing you can do is just to leave it alone and don't let your pets near it.

The outcome of a life in the wild is so much better than in captivity that ODFW will try to foster calves, fawns and ducklings removed from the wild with other herds or flocks—putting the young animal back in the wild with a herd or flock that isn't its own in hopes another animal will raise it.

One way you can help wildlife is to keep your pets away. Domestic and feral cats kill millions of birds each year—and a fledgling learning to fly is the most vulnerable to a cat. Deer and elk see dogs as a threat to their young so may act aggressively in response.

Wildlife can also harm people once they are picked up. A male deer fawn that weighs under 8 pounds at birth can grow to 280 pounds. Deer and elk are naturally wary of humans—but if removed from the wild and raised by people they lose that fear and can go on to behave aggressively and threaten people.

What are the laws about picking up wildlife?

Because of the damage it can do to both wildlife and people, removing an animal from the wild is illegal under Oregon wildlife laws. (ORS 497.308 – No person shall remove from its natural habitat or acquire and hold in captivity any live wildlife in violation of the wildlife laws.)

This law is in place to protect people, too. Wildlife can also harm people once they are picked up. A male deer fawn that weighs under 8 pounds at birth can grow to 280 pounds. Deer and elk are naturally wary of humans—but if removed from the wild and raised by people they lose that fear and can go on to behave aggressively and threaten people.

When should I call a wildlife rehabilitator?

If you are certain an animal is orphaned because you saw its parent die, or you see an animal that is injured, please call ODFW, a licensed wildlife rehabilitator or OSP for advice.

Spaces at wildlife rehabilitators are very limited and most facilities take only certain species. So don’t count on space to be available once you make the mistake of picking up a young animal. In fact, you may be sentencing it to an early death by taking it out of the wild—so don’t do it unless the animal is truly orphaned or injured and until after you’ve talked to ODFW or a wildlife rehabilitator.

I found a seal, sea lion or other marine mammal on the beach that appears to be in distress? 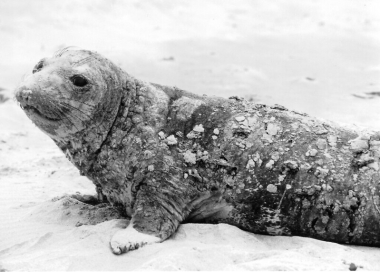 Adult and young marine mammals will commonly rest alone on rocks or the beach. Stay away and keep dogs too. Marine mammal strandings should be reported to OSP's hotline at 1-800-452-7888.

How can I help wildlife during the drought and heatwave?

The same rules apply even during hot summer months—it’s best to leave wildlife alone. That includes not feeding them, so don’t provide food or water.

Leaving out water or food for wildlife will attract them to your yard—and bring other problems like predators or disease. Feeding deer and elk could draw cougars or coyotes, and feeding any wildlife concentrates animals and makes them more vulnerable to a disease outbreak—including zoonotic diseases that can spread to people, too. Feeding also makes wildlife less afraid of people, which puts both the animal and people at risk.

Here's how to help instead: