Piloted in 2014, the Tag Team Program helps ODFW fish biologists better understand the effectiveness of stocking efforts.
It’s also a chance for anglers to participate in fishery management and, perhaps, come away with up to $50.

Why the program started

Historically, fishery biologists would estimate if stocking programs were successful by interviewing anglers about their fishing experiences. This was not an ideal management evaluation because these surveys were limited by the time and expense it took to conduct them. To remedy the problem, the fish tagging and reporting program was born through a grant from the ODFW Fish Restoration and Enhancement Program.

By releasing a known number of tagged fish into lakes, and totaling reports from anglers who caught a tagged fish, ODFW biologists can accurately estimate the percentage of the total population of stocked fish that were caught. Armed with this knowledge, biologists can better serve anglers by stocking the correct number of fish and the most desirable species. Of course, not every tagged fish will be reported, so to sweeten the deal, some tags come with monetary rewards.

Be part of the ODFW tag team

Take an active role in the management of Oregon fisheries! ODFW has released tagged fish in selected fisheries to evaluate harvest, survival and growth, but we need your help. If you catch a tagged fish, please report it to ODFW. Some tags include rewards labeled on the tag that are valued up to $50. Tagged fish can be kept or released. If you release a fish, please write down the tag number and release the fish with the tag intact. If the tag includes a reward, the tag must be removed from the fish and returned to ODFW to receive the reward.

If you catch a tagged fish: 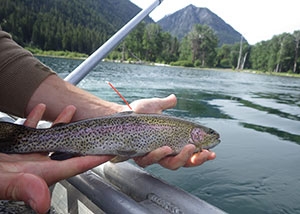 50 places to go fishing within 60 minutes of Medford

Let’s go fishing! not enough time? Think again. If you live in the Medford area, there are a number of...

How to fish for steelhead

Steelhead have been called the ultimate game fish. These elusive and challenging fish can test an angler’s patience and persistence,...

Easy angling in the Northeast Zone

The granite peaks of Oregon’s Blue and Wallowa Mountains form the backdrop for many of this zone’s glacier-carved lakes and...