All anglers fishing for salmon, steelhead or sturgeon (catch-and-release and retention) on all rivers and tributaries in the Columbia River Basin.
This includes:

See the map and list of some the major rivers and tributaries below:

How Much Does It Cost?

Anglers with a resident disabled veteran license, resident pioneer license, or resident and non-resident youth license will be issued a free endorsement upon request. They will need an endorsement to fish for salmon, steelhead or sturgeon in the Columbia River Basin.

Where Can I Get One?

The endorsement may be purchased wherever fishing licenses are sold, including ODFW offices that sell licenses, authorized license dealers and online.

What am I Funding? 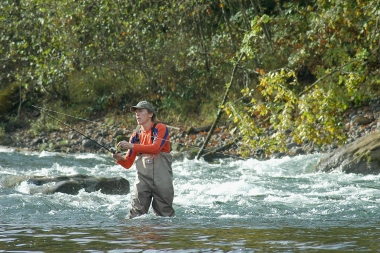 Funds from Oregon’s CRBE can be used for both recreational and commercial fisheries and come with some match by state General Fund dollars. These funds have gone towards efforts to research alternative commercial gear. They have been used to increase hatchery production in off-channel areas, to offset fishery allocation shifts toward recreational fisheries due to the removal of non-tribal gillnet fisheries in the mainstem during spring and summer. The CRBE funds also provide better monitoring of both commercial and recreational fisheries, improved management of salmon, steelhead and sturgeon in the Columbia, and increased enforcement by the Oregon State Police Fish and Wildlife unit.

Washington doesn’t require the endorsement to fish (as of July 1, 2019). Do I still need it in Oregon?

Yes, the endorsement is still needed by Oregon anglers who fish for salmon, steelhead or sturgeon in the rivers and tributaries of the Columbia River Basin. The endorsements in the two states have always been different, started at different times for different reasons, and funding different programs.

Oregon’s Columbia River Basin Endorsement is not set to expire until January 2022, and may be extended beyond that date.

Kokanee are fun to catch, delicious to eat, and found in lakes and reservoirs throughout the state.

Find links to the current fishing and hunting regulations, as well as in-season regulation updates.

50 places to go fishing within 60 minutes of Portland

Let's go fishing! Not enough time? Think again. If you live in the greater Portland area, there are a number of places...