All regulations may be subject to in-season modification. Please see e-regulations for permanent regulations.

Barbless Hooks are required when angling for salmon, steelhead, or trout in the mainstem Columbia River under permanent regulations.

For all fall salmonid fisheries, each legal angler aboard a vessel may continue to deploy angling gear until the daily adult salmonid bag limit for all anglers aboard has been achieved.

Area definition:  From the Buoy 10 line upstream to a line projected from Rocky Point on the Washington shore through red navigation buoy #44 to the navigation light at Tongue Point on the Oregon shore.

General regulations during August 1 – December 31:  1) adult Chinook are longer than 24-inches, 2) adult coho are 16-inches and longer, 3) wild coho must be released, 4) all steelhead must be released August 1 – October 31, and 5) retention of jack salmon prohibited through September 30 a.

Area definition: From a line projected from the Warrior Rock Lighthouse on the Oregon shore to red navigation buoy #4, then to the piling dolphin on the lower end of Bachelor Island upstream to Bonneville Dam.

Bonneville Dam upstream to The Dalles Dam b

General regulations during August 1 – December 31:  1) adult Chinook are longer than 24-inches, 2) adult coho are longer than 20-inches, 3) only hatchery coho (adults and jacks) may be retained downstream of the Hood River Bridge, 4) all steelhead must be released August 1 – October 31, and 5) retention of jack salmon allowed a.

The Dalles Dam upstream to Hwy 395 Bridge (Pasco, WA) b

a The daily bag limit for jack salmon in Oregon is five fish.

b Temporary rules for Thermal Angling Sanctuaries associated with Eagle Creek, Herman Creek, and the Deschutes River are described below.

The sanctuary boundaries span zones so rule modifications are in both the Central and Columbia River zones.

Area definition:  From the angling deadline in Eagle Creek (200 feet downstream of hatchery fishway entrance) downstream to the mouth at the mainline railroad bridge. 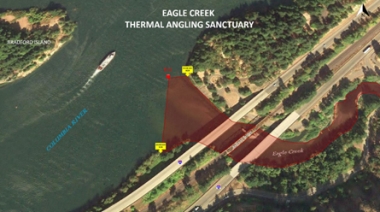 Area definition: From the mainline railroad bridge downstream to markers at mouth.

Area definition: Herman Creek Lagoon/Cove east of a line from the northwest tip of the jetty, south to a marker on the Oregon shore. 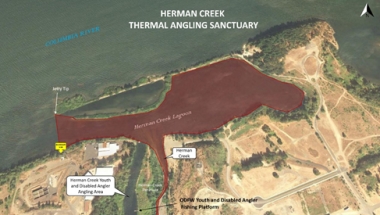 Area definition:  From markers at lower end of Moody Rapids downstream to the mouth at Interstate 84 Bridge. 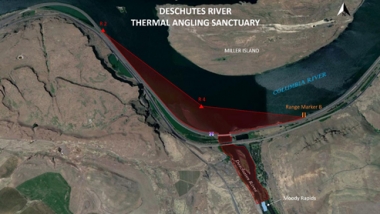 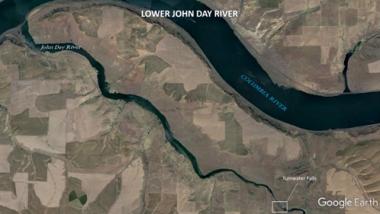 *Permanent regulations apply for other sections of the above tributaries

If there’s not a photo, it didn’t happen

Submit your fishing photo  to ODFW and we might use it here or elsewhere on MyODFW.com.

Send us your fishing report

We’d love to hear about your recent fishing experience. Send us your own fishing report through ODFW Fishing Reports―the information will be forwarded to the local biologist who may use it to update various ODFW resources such as the weekly Recreation Report.

Finding garbage at your favorite spot?
Consider packing some out

During the past year, more people have been fishing and getting outdoors. And the garbage they’ve left behind proves it. Next time you head to the water, put a garbage bag in your pocket and fill it with any garbage you find. After you’re done fishing, of course.

Hunters, anglers and wildlife viewers will be living with the impacts of the 2020 wildfire season for a long time. To help you navigate the status of popular recreation sites, natural resource management agencies in Oregon have released an interagency status map that shows open, closed and reduced service areas on a single map, regardless of reason for closure.

ODFW samplers (aka fish checkers) will be at docks, boat ramps, and bank areas in a number of locations along the Columbia and Willamette rivers to collect information required to manage fisheries. Your cooperation in maintaining a minimum of 6 ft. distancing and providing your catch for inspection and collection of sampling data in a safe manner is appreciated.

Columbia River regulation updates for salmon, steelhead, shad and sturgeon can be found above.

Weekly checking showed no catch for one boat (two anglers).