Oregon just has one species of bear, the black bear.

Oregon's black bears don't always live up to their name. Their coloring can be blonde, brown, cinnamon, and of course, black.

Check ODFW's Living with Wildlife, Bears for great tips on working or recreating in bear country, homeowner checklist to keep bears at bay, and more. 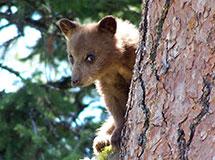 Black bears are the largest extant carnivores in Oregon. They are, however, smaller than grizzly bears, and they lack the grizzly's distinctive shoulder hump.

A black bear is heavily built with stout legs and large feet. The eyes and ears are relatively small and the tail is extremely short. The claws are recurved but relatively short with those on the forefeet equal to or only slightly longer than those on the hind feet. The characteristic humped shoulders and dished face of the grizzly bear are absent.

During spring-autumn seasons, black bears tend to be more active during daylight and crepuscular periods, but in the month or so before and after the period of winter dormancy they are less active overall and more nocturnal.

Throughout most of their geographic range in autumn, black bears fatten, become more and more lethargic, enter dens, and remain inactive throughout winter. Den sites are commonly under stumps and logs or in holes in hillsides, but may include hollow trees, rock caves, drainage culverts, abandoned buildings, or in some regions even unsheltered depressions. Dens usually are well hidden by dense vegetation and, in colder regions, often open to the north or west.

Black bears in Oregon occur in the Cascade Range and west to the Pacific Ocean, and in the Blue and Wallowa mountains; the species is absent from arid regions of central and southeastern Oregon.