Bitterns, herons, and egrets are all long-legged wading birds with long necks and pointed bills for spearing fish or other prey.

Types of Bitterns, Herons and Egrets 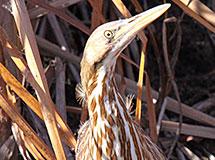 Skulking through wetlands, the American bittern is rarely seen - it has an extremely slow and stealthy walk, and when a threat approaches it freezes and mimics marshland plants with upright posture and beak pointed skyward. These behaviors combined with its cryptic plumage effectively camouflage the bird. However, it is occasionally seen in flight, and its low, gurgling song can be heard over long distances.

An uncommon to fairly common breeder east of the Cascades and a rare migrant in Malheur county it has also been noted at mountain lakes east of the Cascades in Lake County. In western Oregon it is uncommon along the coast, Sauvie Island, and has been noted in spring in northeast Jackson County. Wintering birds have been found thought the state except for the Blue Mountains.

Hear the call of the American bittern 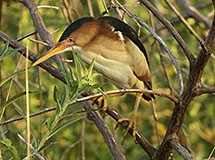 Inconspicuous and master of stealth, the Least bittern inhabits densely vegetated deep-water marshes, making observations rare and difficult; its call is often the only way to detect this secretive species. The smallest of herons, its long neck and legs make it appear larger. The crown, back and tail of male birds is greenish black; purple-chestnut on female. Neck, flanks, and underparts are brown and white and the wings buff.

It is a rare spring and summer resident in larger freshwater marshes of eastern Oregon and a very rare spring through fall visitor in the Rogue and Willamette valleys. At Upper Klamath, Malheur and Klamath National Wildlife Areas, this species occurs in islands or edges of dense marsh vegetation of hardstem bulrush and cattail.

Hear the call of the Least bittern 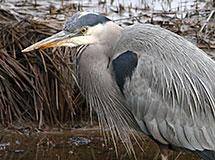 This is one of the most widespread and familiar waterbirds in Oregon. It is the largest heron in North America, standing approximately four feet tall.

It is slate gray with a white crown, cheeks, and throat, rusty thighs and a uniformly yellow bill. Adults develop long gray-white plumes on chest, neck, and back during breeding. Juveniles have similar plumage but may be distinguished by absence of breeding plumes, a dark crown, and dark upper bill.

Great blue herons frequent many habitats from shallow areas of marshes, lakes, streams, and oceans, where they feed on fish, amphibians, and aquatic invertebrates; to pastures and dry fields where they hunt for rodents, primarily during the winter. Herons are highly adaptable and may be found hunting in urban settings such as ponds of city parks. The Great blue heron is a fairly common to common resident throughout the state.

Hear the call of the Great blue heron 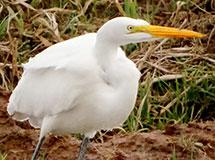 The Great egret is much larger than Snowy or Cattle egrets, and has a unique combination of yellow bill, black legs, and a cape of feathers draping beyond the tail in the breeding season.

As a breeder, the Great egret is most abundant east of the Cascades, but it is present year-round in the Klamath Basin. It is more common April through November. It is also fairly common to abundant on the south coast except during summer months. In summer, it is rare west of the Cascades, but is a regular local breeder around Coos Bay. In fall, it occurs statewide, especially in the south central and southeast Willamette Valley and coast.

Hear the call of the Great egret 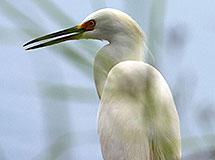 The Snowy egret is intermediate in size between Great and Cattle egrets, and much more common in Oregon than the latter. Adults have a black bill and legs and bright yellow feet; immatures show yellow on the back of their legs. In the breeding season, plumes are present on head and breast, and curve upwards on the back.

The Snowy egret breeds regularly, in varying numbers, primarily in eastern Oregon. It is uncommon to fairly common spring through fall in the Klamath Basin and occasional in the northeast Malheur County. On the south coast it is rarely found in summer, but primarily occurs in Coos Bay in winter. It nests in riparian, marsh, and tree habitats.

The Snowy egret is an Oregon Conservation Strategy Species in the Northern Basin and Range ecoregion.

Hear the call of the Snowy egret 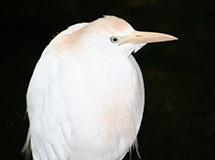 Cattle egrets are the smallest of Oregon's three egret species, with short, stout neck and legs, and white body with orange-buff plumes on the head and nape in spring and early summer. They are named for their association with livestock, consuming insects on their backs or stirred up by their hooves.

In Oregon, the Cattle egret is a casual transient in spring in the Klamath Basin and rarely in the Malheur National Wildlife Refuge. The least widespread of the state's egrets during the breeding season; a rare breeder in the Great Basin and a few pairs occasionally nesting at Malheur and elsewhere in the Harney Basin. In fall, it is uncommon east of the Cascades. It is also uncommon to rare on the coast and very rare in western interior valleys fall through spring. It is seen in the coastal counties in winter foraging in pastures, golf courses, and grassy areas, sometimes with livestock.

Hear the call of the Cattle egret 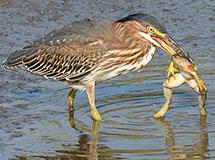 Though less conspicuous than Great blue herons, Green herons are well-established residents of western Oregon. They are distinguished by small size, glossy greenish-black cap and back, yellow legs, blackish-green wings, gray underparts, and dark red neck. One of the few tool-using birds, Green herons are experts at making and using baits and lures, such as bread crusts, mayflies, earthworms, sticks, and feathers to catch fish.

The Green heron is an uncommon but regular migrant and summer resident throughout west and south central Oregon. Detection of nests is difficult and breeding status uncertain in some areas due to its secretive habits. Observations are reported regularly on the south coast.

Hear the call of the Green heron 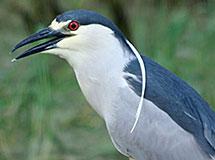 Although quite common in the U.S., the Black-crowned night-heron's nocturnal and crepuscular feeding habits can make it difficult to locate. Its habitat consists of marshes, lakes, rivers, and other wetlands, where it feeds mostly on fish. It is a thick-billed, medium-sized, stocky heron with relatively short neck and legs. Adults have a black back and cap which contrast with the pale gray or whitish underparts. Immatures have brown backs with large pale spots and heavily streaked underparts. A distinctive choking squawk call is often heard at dusk.

It is a fairly common summer resident east of the Cascades where it breeds locally at large wetlands. This species has nested on Malheur Lake in the Malheur National Wildlife Refuge since at least 1918 and continues to breed there. Several other colonies have been documented in Lake and Harney counties. Night -Herons are known to shift colony locations in response to changing water conditions. It is observed more widely when postbreeding adults and young disperse, and may be locally abundant during fall in eastern Oregon favored locations such as Malheur National Wildlife Refuge.

Black-crowned night-herons usually breed in colonies with other species of colonial nesting waterbirds. They use a broad spectrum of habitat types for nesting from the ground up to 160 feet in trees. Breeding colonies are typically found on islands, in marshes, or over water.

Hear the call of the Black-crowned night heron 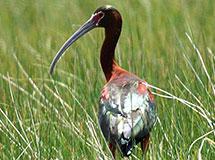 Sporting the form of a curlew, this medium-sized marsh wader is almost always found in flocks, flying in formation and quacking like ducks. Their long, down-curved bill complements their long neck and legs. Although their feathers appear black, a closer look will reveal an iridescence of bronze, purple, maroon, and green. They are named for their "white face" which appears in alternate plumage as a narrow border of white feathers along the edge of their reddish-purple facial skin, delineating a mask around the red eye.

The White-faced ibis has extended its breeding grounds in Oregon to wetlands in Harney, Lake, and Klamath Counties. East of the Cascades it is generally common from May through September near breeding areas. Other spring and fall birds have been noted in Crook, Grant, Malheur and Wallowa counties. West of the Cascades its presence has recently become apparent on the coast and occasionally in the Willamette Valley in spring. In winter it is occasional to rare on the coast and at Sauvie Island and the Malheur National Wildlife Reserve.

It usually breeds in mixed colonies in areas isolated from disturbance and predators with other colonial-nesting waterbirds. It feeds in seasonal wetlands along shallow lake shores and in irrigated agricultural fields. Opportunistic in feeding, this species often focuses on receding wetlands where prey is concentrated.

Hear the call of the White-faced ibis