Oregon's state songbird, the Western meadowlark, is included in this group of birds.

Observers can see mixed flocks of Oregon's four species of blackbirds, the Great-tailed grackle and the Brown-headed cowbird.

Types of Blackbirds, Grackles, and Orioles 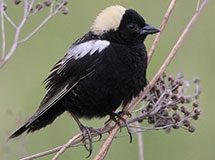 Bobolinks summer in Oregon's eastern grasslands and meadows, singing what has been described as a bubbling delirium of ecstatic music that flows from the throat of the bird like sparkling champagne. The yellow-brown female, juvenile or non-breeding male may at first appear to be a sparrow, but the breeding male has an astonishing and diagnostic backwards tuxedo pattern of buff on the nape and white rump and scapulars on an otherwise black body.

The Bobolink is a regular, locally common breeder at the Malheur National Wildlife Refuge and a few scattered pairs occur in northeast Oregon. West of the Cascades, some rare spring and summer records include singing males in the Willamette Valley in Marion and Lane counties. They are also casual visitants on the coast in fall.

The Bobolink is an Oregon Conservation Strategy Species in both the Blue Mountains and the Northern Basin and Range ecoregions.

Hear the song of the Bobolink 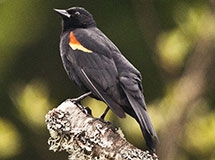 The male Red-winged blackbird, sentry of the marsh during the breeding season, continually announces its territory to all present with its oak-a-tee song, and tenaciously defends against flyby predators. The male is territorial, polygynous, larger than the female, and glossy black with a broad bar of red-orange, bordered with yellow, on wing writs. Females are less conspicuous in behavior, light brown, with a heavily streaked breast, and buffy supercilium. This is one of the most abundant and studied birds in North America.

Hear the song of the Red-winged blackbird 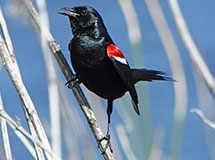 In Oregon, breeding colonies are scattered and intermittent at specific locations, though sites used during consecutive years may be in the same general area. The Tricolored blackbird breeds most consistently in Klamath and Jackson Counties. Small colonies and summering residents have been found in the Willamette Valley; during fall and winter they are rare. Most retreat south to California in winter, while some remain in Oregon, mainly in the Rogue Valley and Klamath Basin. Oregon breeding colonies occur in hardstem bulrush, cattail, nettles, willows, and Himalayan blackberries. Breeding colonies are conspicuous because of the high bird density and continuous loud raspy calls.

The male is entirely black, with deep red shoulder patches bordered by white on the wing. The female is blackish brown above, streaked only on the breast, throat, and supercilium.

Hear the song of the Tricolored blackbird 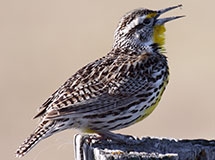 In grass or sagebrush-dominated habitats throughout the state, the song and striking appearance of the Western meadowlark create one of the most familiar and endearing avian images in Oregon.  It's one of  Oregon's most recognizable birds with its bold yellow breast and belly with a distinct black V across the chest and its habit of perching on fences along roadsides.  Fittingly, it was chosen as Oregon's state bird by a vote of Oregon schoolchildren ratified by the Legislature in 1927.

The Western Meadowlark is an Oregon Conservation Strategy Species in the Willamette Valley ecoregion where much of its habitat has been disturbed by human activities.

Hear the song of the Western meadowlark 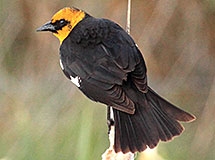 The song of the Yellow-headed blackbird, if it can be called a song as it lacks any musical quality, is a familiar sound in the marshes particularly of central and southeastern Oregon. The male, with its yellow head, neck, and breast, black body and wings, and white wig patches, is unmistakable. The female is more subtle with its dusky or sooty brown body plumage and yellow cheeks, chin, throat and chest, but is also distinctive.

It is an abundant spring and summer resident in marshes of large alkaline lakes and wetlands in southeast Oregon, most notably the Klamath, Summer, Malheur, and Harney Lake basins. It is local and uncommon on smaller bodies of water, marshes, and flooded areas east of the Cascade crest. It is increasingly rare north to the Columbia River except in Morrow and Umatilla counties where it is locally common. It nests in common (broadleaf) cattail and hardstem bulrush standing in deeper water along pond, lake, or marsh edges.

Hear the song of the Yellow-headed blackbird 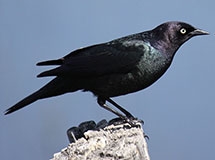 Highly adaptable, this ubiquitous species may be found in habitats as diverse as coastal marshes, sagebrush, shrub-steppe, and urban supermarket parking lots. The adult male is blackish, showing a purplish sheen on the head and a greenish sheen on his back. Its eyes are yellowish to creamy white. Females and juveniles are dusky brown above and grayish brown below, with paler throat and eyebrows, and brown eyes.

The Brewer's blackbird is a common permanent resident along the coast. West of the Cascades it is common to abundant in inland valleys. Within the Cascades, they are a migrant and summer resident in meadows and at human settlements. East of the Cascades, they are an abundant summer resident and uncommon winter resident. It is found in open areas such as grasslands, pastures, lawns, golf courses, agricultural fields, alpine meadows and beaches and is very common in urban areas.

Hear the song of the Brewer's blackbird 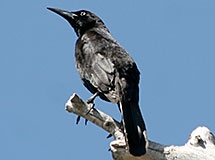 This is a bird of riparian thickets, farmlands, and towns. Since 1980, it has been observed almost annually in Harney County, usually in numbers less than five. A pair successfully fledged young near the Malheur National Wildlife Refuge headquarters in 1994.

Most Harney County records occur from early April to late October. Away from Harney county individuals have also been seen in the various eastern and southeastern counties of Oregon.

Hear the song of the Great-tailed grackle 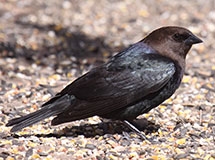 The Brown-headed cowbird was referred to in early literature as the "buffalo bird" presumably because it commonly foraged on insects flushed under the feet of ungulates.

It is a brood parasite, laying its eggs in nests of other species and leaving the rearing of young to surrogate parents. This has had serious consequences for many host species within the cowbirds' range.

In Oregon, the Brown-headed cowbird is a common migrant and breeder in open habitats and woodland edges in all parts of the state. It is most abundant in agricultural land, sagebrush and juniper steppe, coastal scrub, riparian zones, and suburban areas.

Hear the song of the Brown-headed cowbird 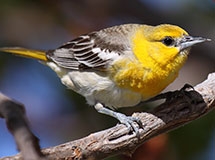 A boldly colored medium-sized bird, the Bullock's oriole builds its characteristic hanging nest in broadleafed trees and tall shrubs, especially when the trees or shrubs are spaced widely and situated along the edges of streams and fields.

In Oregon, the Bullock's oriole is a rare to fairly common breeder, especially along major rivers and around farmsteads. It is most widespread in southwest and northeast Oregon. In particular, on the Derby Road in Jackson County.

It nests primarily in open spaced cottonwoods, maples, and other tall, forking broadleaf trees. The nest is constructed of plant fibers, hairs, fine grass, and moss, usually at the end of a branch, it is fastened to supporting twigs both at its sides and its top. This bird eats mainly insects.

Hear the song of the Bullock's oriole