This group of birds includes some very familiar ones, the American robin and Western bluebird.

Species in this group are diverse and are not closely related at all.

Types of Bluebirds and Thrushes 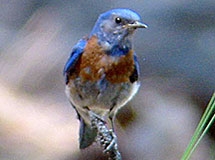 This cavity-nesting thrush is one of three bluebird species found only in North America. Previously abundant in western Oregon, the Western bluebird suffered a precipitous decline through degradation of habitat and avian competition.

The male has a cobalt blue head and throat, blue wings and tail edged with dusky brown, russet breast and flanks, gray-blue belly and undertail coverts. Female colorations are subdued: head and throat gray, back gray-brown, wings and tail pale blue, breast and flanks pale russet. The amount and brightness of blue and russet are brighter on older birds.

The Western bluebird breeds in open habitats with suitable nest cavities and structures through forested mountains and patchily in wooded lowlands. It is most abundant in western Oregon, in low- to moderate-elevation foothills. It is fairly common on the south coast and on the eastern slopes of the Coast Range foothills and other hills intruding the length of the Willamette Valley. It is common in the Rogue and Umpqua valleys and variably rare to locally fairly common east of the Cascades. It is mostly absent during breeding season from the high deserts of the southeast Oregon.

The Western bluebird is an Oregon Conservation Strategy Species in the Willamette Valley.

Hear the song of the Western bluebird 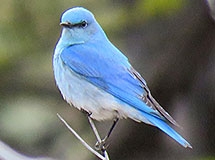 The graceful short-distance flight of a bright male bluebird is a memorable sight. The Mountain bluebird haunts open country, providing an irreplaceable color note in the gray sagebrush landscape; particularly when in migration their brilliant blues flash in the desert sun in startling contrast to the prevailing dull colors of most other birds.

Like other bluebirds, it readily accepts nest boxes. This accessibility, along with its sky-blue color, have always endeared it to nature lovers and made it a favorite of many.

Hear the song of the Mountain bluebird 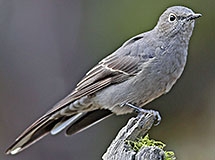 The complex song is varied, soft and flute-like at times, strong and powerful at others. The call carries well, and is a characteristic sound of the winter bird community in juniper woodlands east of the Cascades.

It is a summer resident in the Coast Range. It breeds in and near open coniferous forest stands, natural forest openings, burned areas, shelterwood cuts and clearcuts to the timberline.

Hear the song of the Townsend's solitaire 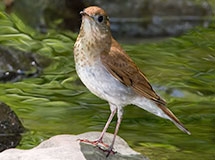 The Veery is known less for its appearance than for its ethereal song, a series of spiraling, reverberating flutelike notes, each lower in pitch, suggesting the name: vee-ur, vee-ur, vee-ur. A patient observer may get a fleeting glimpse of a small thrush with reddish brown upperparts, pale undersides, and a buffy upper breast with a few darker spots.

It is an uncommon breeder in lower to middle elevations in the Blue Mountains where sufficient riparian thickets exist for cover and forage needs. It is locally common along watercourses in Union, Wallowa, and east Umatilla counties, and less common in north and west Baker, Grant and Crook counties. It also occurs, irregularly, in Wheeler, Morrow, Deschutes, Harney and Malheur counties.

Hear the song of the Veery 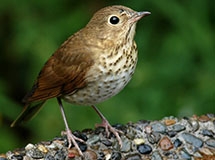 Although they are one of the most abundant breeding birds in forests and woodlands west of the Cascade crest, it can be difficult to actually see Swainson's thrushes. Drab plumage and the habit of sitting very still hides them from the eyes of would-be predators and birdwatchers alike, especially in the shrubby habitats they favor.

However, the beautiful song of this minstrel compensates for a lack of colorful plumage. During the longest days of summer, a chorus of liquid notes rising from the deep shadows each dawn and late afternoon reveals the actual abundance of this species in the conifer forests of western North America.

It is a very common summer resident in conifer forests throughout the Coast and Cascade ranges except the southern Cascades in Jackson County.

Hear the song of the Swainson's thrush 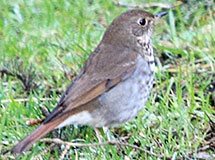 Rather plain gray to brown with a spotted breast and reddish tail, the unobtrusive Hermit thrush blends well with the dappled light of the forest understory.

It is famous for its sweet, clear, musical song. In includes three or four passages, separated by considerable intervals at higher or lower pitch, but each opens with a flute-like note that gives the performance the effect of a chant of sacred music.

In Oregon, during migration and in winter, Hermit thrushes may be found in some residential areas that have dense stands of shrubs, particularly berry producers, and conifers.

Hear the song of the Hermit thrush 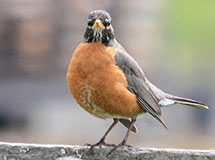 Arguably the most widely recognized of Oregon's birds, the American robin is the largest, most abundant, and most widespread thrush in the state. Ranging from sea level to treeline, the robin's loud, musical voice and conspicuous brick-red chest make it unmistakable to even the most casual of observers. The robin thrives in both human-dominated and natural landscapes and is considered to be a habitat generalist throughout its range.

Considering the robin's natural history, we know most about its diet, which comprises primarily of soft invertebrates in the spring and summer and fruit in the fall and winter. It is most abundant in Northwestern Oregon, where it breeds from Lincoln County northward and in the Willamette Valley.

Hear the song of the American robin 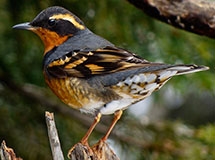 When glimpsed in the deep shadows of its preferred densely forested habitat, this secretive thrush resembles a plump robin. But a clearer view will reveal the distinctive fieldmarks of a dark breast band, orange eyebrows, and orange wingbars. As striking as its plumage is its unmistakable song: a succession of single drawn-out, ventiloquial notes, given at different pitches that pierce the fog and dense foliage of its favored haunts in lush coastal and montane old-growth forests.

In Oregon, it breeds throughout the Coast Ranges and in the Cascades. It is a fairly common breeder in low-elevation hemlock and spruce forests along the coast, but elsewhere it only rarely nests in lowland conifer forests.

Hear the song of the Varied thrush 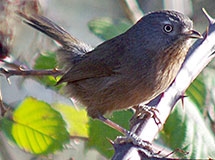 This is a mouse-like bird, only occasionally musters the courage to dart from its shadowy domain. The male and female are generally indistinguishable by external characters. Both sexes are small and brown, with dim streaks on a paler, often pinkish breast; generally paler and grayer in drier regions. Both sexes sing; the female's repeated single note is easily distinguishable from the male's fast trill introduced by several individual notes.

The Wrentit is a resident along the coastal slope; in the Columbia River Lowlands and in the south inland to the west Klamath Mountains. It uses a wide range of habitats depending on the geographic location.

Hear the song of the Wrentit