Cats are uniquely adapted to ambush or stalk prey.

Oregon's three cat species all belong to the same family as the domestic house cat. Cats are muscular but graceful and have retractable claws to hold prey. 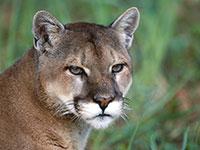 The skull of the cougar, also know as mountain lion, is massive; the canine teeth are large and slightly recurved. The heel pads of both fore and hind feet have three lobes on the posterior margin which are useful in separating the tracks of a cougar from those of other felids, such as the lynx. The dense and soft dorsal fur typically is tawny, but slate gray and reddish brown individuals are known. The venter is whitish. The back of the ears and tip of the very long tail are brownish black. The upper lip is white. Young cougars are light tan spotted with brownish black.

They are often active as much during the day as at night and use caves as retreats. They are largely solitary mammals; the only appreciable associations are of the female and its young and that of the female and male during mating season.

The cougar appears throughout western Oregon, but east of the Cascade Range the species is probably limited largely to the Ochoco, Blue and Wallowa mountains. They range over broad areas and move long distances. Although it is possible to observe cougars in almost any habitat type, they are usually found in remote forested areas and often in dense vegetation, especially in winter.

ODFW's Living with Wildlife, Cougar page has tips on living with cougars, recreating in cougar country, comparing cougar and dog tracks and more. 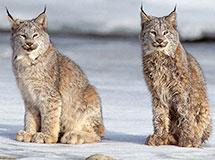 The Canada lynx is only slightly larger than the bobcat. Nevertheless, long legs and long fur produce the illusion that the lynx is considerably larger than it actually is.

Documented accounts of wild lynx are rare and lynx are not expected to currently reside in Oregon. However, if lynx were to be observed, it is likely to occur at higher elevations such as in the Cascade Range, Blue Mountains or Wallowa Mountains. Habitats used by lynx often are defined in terms of habitats used by their primary prey species, thus good snowshoe hare habitat usually is considered to be good lynx habitat. Lynxes commonly occur at altitudes and latitudes at which snow cover is deep in winter.

There are five toes on the forefeet and four on the hind feet; the heel pad is unlobed. The feet are broad and the load/unit surface area is low, thereby permitting the lynx to traverse deep snow easily. Lynxes are grizzled grayish brown in winter, but more reddish brown in summer. The undersides and legs are buffy white; the ears are brown with a white spot and long black tufts; the face is marked with white and the throat is white; and a black tip completely encircles the tail.

Although adult lynxes usually are considered to be solitary, two to four have been known to travel together, usually in single file, but in good snowshoe hare habitat the lynxes would fan out and appeared to hunt cooperatively. They are more active at night than during the day and usually bed in the snow at the sight of a kill, use another bed for midday resting, and sometimes use another bed either at a second kill or for another midday rest. On clear days, lynxes often bed at the base of large trees on south slopes to take advantage of solar heat, but on stormy days they seek shelter. 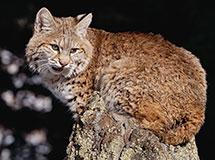 The bobcat is the smallest wild felid in Oregon, with females being considerably smaller than males. The bobcat is about twice the size of a domestic cat, but its legs are longer, its tail is shorter, and its body is more muscular and compact. The feet are relatively small and the bobcat is not well adapted to negotiate deep snow.

In general, the variously spotted pelage is yellowish with grayish overtones in winter and with reddish overtones in summer, reflecting the two annual molts. The ears are black with a large white spot and are equipped with short black tufts. The tail is black-tipped and there may be several blackish bars proximate to the tip. The venter is white with dark spots and the legs and feet are whitish with dark spots or bars. The sides of the face are extended by a ruff of fur. Bobcats in western Oregon possess more distinct markings than those in eastern Oregon.

The bobcat occurs statewide in Oregon. It inhabits all habitats except intensively cultivated lands and areas at high altitudes.