Coyotes, wolves and foxes are all part of the Canidae family.

Coyotes, wolves and foxes are found throughout Oregon, depending on the species. The gray wolf, kit fox and Sierra Nevada red fox are Oregon Conservation Strategy Species.

Types of Coyotes, Wolves and Foxes 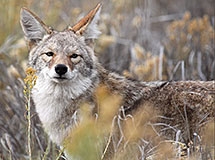 The coyote is a typical canid intermediate in size between the foxes and the gray wolf.

The pelage of the coyote is grayish, buff, pinkish cinnamon, or brownish, or a combination of those colors, often overlain by blackish tipped hairs on the ears, muzzle feet, and dorsum. The lips and eyelids are black, accentuated by contrasting borders of white fur. The underparts are paler than the remainder of the body. Considerable variation in color and markings of coyotes is evident among individuals and regionally east and west of the Cascade Range. True albinos with pink eyes and pink foot pads are known to have occurred in Oregon.

Their secretive nature, largely nocturnal or crepuscular activity, and wide-ranging movements have limited study of coyote behavior. Although it is considered only a moderately social species, it possesses a highly developed communication system that facilitates development and maintenance of long-term social relationships.

In Oregon, the coyote is fairly uniformly distributed except for the northwestern corner of the state. It occurs in habitats ranging from grasslands to shrub-steppe to boreal forests and from remote wilderness to highly urbanized areas.

ODFW's Living with Wildlife, Coyotes has fact sheets and tips on avoid conflicts with coyotes. 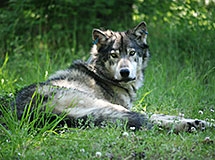 Canus lupus is the largest canid, not only in Oregon, but in the rest of the world as well.

The wolf has relatively long legs, a narrow and deep chest, elbows that turn inward and foot pads that turn outward. These, combined with the digitigrade feet possessed by all canids, make the wolf highly adapted for running. The pelage of gray wolves is long over the body and tail, but relatively short on the legs and face. The predominant color is gray, but the legs, flanks, and venter sometimes are yellowish or light brownish. These colors are overlain by long, black guard hairs on the dorsum, tail, and mane; some individuals are essentially entirely black. Occasionally, but more commonly in higher latitudes, all-white individuals occur.

Wolves commonly function in packs consisting of two to nine individuals; packs basically are family units. Pack cohesion is based on ties developed during courtship of adults and those developed during early life of the young. Wolves may be active at any time, but tend to be more active at night. They travel extensively. Howling, distinctive among individuals, is used to assemble the pack and to advertise the territory. 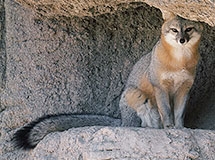 The gray fox is among the smaller canids in Oregon.

The basic color of the gray fox is grizzled gray, but the stiff middorsal hairs have long black tips that extend onto the tail as a black mane. Guard hairs are banded white, gray, and black. The throat, venter, and inside of the legs are white; a cinnamon-rufous border to the white throat extends on the flanks and underside of the tail A blackish patch on the side of the face extends onto the lower jaw and a grayish black "exclamation point" extends upward from the interior margin of each eye. The ears are cinnamon on the exterior and lines with long whitish hairs extending from the interior margins. The feet are grayish white.

Although the gray fox may be seen abroad during daylight hours, most activity is nocturnal or crepuscular. Usually, the gray fox is secretive. Ground dens used by gray foxes frequently are the modified dens of other species; hollow logs, abandoned buildings, refuse piles, and rocky outcrops also may be used as den sites. Dens are commonly concealed by thick, brushy vegetation. The gray fox is unique among other North American canids in that it climbs trees to escape pursuit, to forage, and to rest. 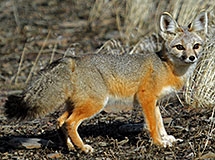 The kit fox is the smallest canid that occurs in Oregon.

It has the typical canid conformation: the body is slim, the legs are long and thin, and the ears are large and erect. The tail is about 40 percent of the total length and is tipped with black, but has no dark mane on the dorsal surface. The feet and legs are whitish interiorly, light rusty-brown posteriorly. The dorsum is grizzled brownish-gray medially blending to grizzled gray then to light buff laterally and finally to white on the chest and venter. The head and posterior surface of the ears are slightly lighter than the dorsum; anteriorly, the ears contain long white hairs.

The activity of the kit fox is largely nocturnal, although adults with young commonly emerge from dens shortly before sunset and young may be active outside the den in late afternoon. Neither individuals nor families seem to have exclusive hunting territories, but certain dens seem to be the exclusive property of specific family groups.

The kit fox is an Oregon Conservation Strategy Species in Northern Basin and Range ecoregion. 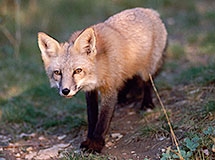 The red fox has a beautiful orange-red coat, black feet, and black-tipped ears. The belly is usually white or light grey, the muzzle is narrow and pointed, and the ears are pointed.

It is an opportunistic carnivore, eating what is available including small mammals, birds and their eggs, reptiles, amphibians, fruit and some insects. The red fox is territorial and mates for life

Red foxes occur throughout much of Oregon. 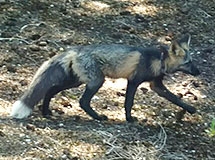 The Sierra Nevada red fox is a montane red fox subspecies. Its presence in Oregon was confirmed in 2015, specifically in the Mt. Jefferson, Mt. Washington, and Three Sisters Wilderness Areas.

The Sierra Nevada red fox is smaller than the red fox and averages about eight pounds. This fox has three color phases: silver (black), "cross" color phase and the more familiar red.

Research continues on this species in the Oregon Cascades. Biologists captured and radio-collared several Sierra Nevada red foxes in Deschutes County in 2017.