Oregon has nine species of jays, crows and magpies.

These birds are intelligent, curious, social and have good memories. Members of this group are commonly called the crow family, and are the among the most intelligent birds studied so far.

Types of Crows, Jays and Magpies 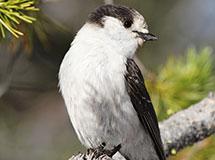 Gray jays are common visitors at mountainous campsites and parks and are commonly known as "camp robbers" for their habit of taking food from humans. Gray jays in the Blue Mountains have the top of their heads white, while birds in the Cascades and Coast ranges have white restricted to the forehead. Coast Range birds are decidedly browner vs grayish overall.

In Oregon, the Gray jay resides in conifer forests of the Coast and Cascade ranges, the eastern slope of the Cascades at Ft. Klamath and in the southwestern part of the state.

Hear the call of the Gray jay

The Steller's jay is unmistakable with its charcoal and blue plumage, distinctive crest, and raucous call announcing its presence. Steller's jays forage on the ground and in trees and bushes. Omnivorous, they eat a variety of animal and plant food. This jay nests in trees or shrubs and often places the nest near the trunk and within 10-16 feet from the ground.

In Oregon, it is a common resident in mesic and dry conifer and mixed conifer-hardwood forests from valley floors to near timberline. It is found in forests of the Coast and Cascade ranges during breeding season.

Hear the call of the Steller's jay 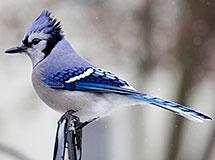 One of the characteristic birds of woodlands and city streets is this loud, colorful jay. Its bright blue-and-white-plumage and shrill calls are quite distinctive. It is closely related to the Steller's jay and hybrid individuals have been noted where their ranges overlap. It is an opportunistic forager of small animals and invertebrates, but is predominantly a vegetarian.

It is a rare to regular visitor to eastern and western Oregon from late September to late April. The Blue jay prefers open mixed forests or deciduous groves and is often found in orchards and parks and along wooded city streets.

Hear the call of the Blue jay 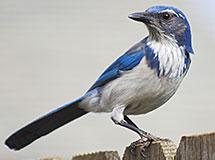 The name of the Western scrub-jay derives from its preference for "scrub" habitat, consisting chiefly of shrubs or brush intermixed with sparse trees. It calls attention to itself with its raspy metallic shriek.

Its harsh voice and fussy, boisterous behavior might lead some to consider the scrub-jay a nuisance, but this bird also possesses abundant character and is considered to be uncommonly smart and adaptable.

The Western scrub-jay is a common permanent resident in western interior valleys and foothills between the Coast Range and the Cascades, especially in the Willamette, Umpqua, and Rogue valleys.

Hear the call of the Western scrub-jay

The haunting cries of these wanderers evoke a variety of reactions from curiosity to wonder.

Highly social, the Pinion jay epitomizes the dynamics of flock behavior such as colonial nesting, communal feeding of young and non-territoriality. Although Pinyon jays are nomadic and unpredictable, each flock is a tight-knit, integrated unit occupying a home range that does not overlap with other flocks. Flocks may wander widely outside their home range if sufficient food is not available.

The Pinyon jay is a permanent resident in juniper and ponderosa pine woodlands of central Oregon. Oregon's know breeding population is confined to the Metolius River drainage eastward along the south Ochoco Mountains, south through Bend and east of Newberry Crater to Silver Lake basin eastward to the Lost Forest in Lake County.

Hear the call of the Pinon jay 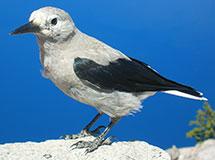 On his historic expedition with Meriwether Lewis, Captain William Clark, the bird's namesake, first mistook this species for a woodpecker undoubtedly because of its long, sharp beak. However, this most specialized member of the North American Crow family uses this apparatus to pry loose its favored seeds from unrelenting cones of several pines with which the nutcracker has a symbiotic relationship. The whitebark pine, in particular, is totally reliant on Clark's nutcrackers for seed dispersal and germination.

In Oregon the Clark's nutcracker is a resident along the crest of the Cascades, usually above 4,000 feet, lower on the east slope, from the Columbia River south to the California border, west into the Siskiyous, and east to the Warner Mountains, northeast throughout the Blue and Wallowa mountains. It is very common at Crater Lake.

Hear the call of the Clark's nutcracker 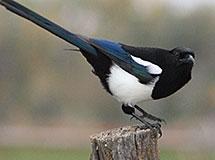 This is one of the most audacious of Oregon's resident avifauna both in appearance and behavior. Its black coat and streaming tail dappled in blue-green iridescence contrasts starkly with its flashing white wing feathers during flight.

Common and conspicuous east of the Cascades, the magpie prefers open areas stippled with dense thickets or trees. They are highly social, often gathering in large flocks. Historically despised and persecuted by hunters, farmers, and ranchers, this trickster has flourished in the tradition of the coyote.

Hear the call of the Black-billed magpie 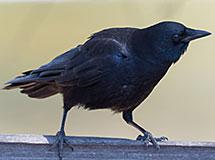 So familiar is the American crow that it has been said if a person knows only three species of birds, one of them will be the crow. Recognized by its coal-black plumage, fan-shaped tail, and nasal caw call, it is found throughout most of North America, and its seemingly mischievous character has been immortalized in folk tales and fables.

These shrewd birds possess a superior intelligence and an ability to learn and make decisions. They are also sociable, joining together in large roosts, especially in fall and winter. Able to thrive in a wide variety of environments, crows are expanding into urban areas and habitats created by farming, forestry, and other human alterations.

In Oregon, the American crow is a very common resident west of the Cascades in interior valleys, urban areas, and along the coast and is a fairly common resident throughout the Coast Range lowlands and in the west cascade foothills. It is abundant in the south Willamette Valley, with records distributed evenly throughout the year.

Hear the call of the American crow 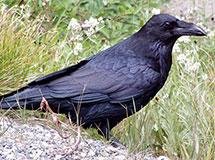 Ravens are clever, innovative, and entertaining. They quickly exploit human-created opportunities for food and shelter. Their spectacular aerial acrobatics conducted under windy or thermal conditions appear to be an act of fun.

The Common raven's plumage is entirely shiny black like the American crow, but the ravens appear 25 percent larger, have a wedge-shaped tail and have deeper croaks and other calls than the American crow.

In Oregon, the Common raven is a fairly common, widespread resident in many habitats throughout the state; population densities are highest east of the Cascades.

Hear the call of the Common raven