This group of birds includes the invasive House sparrow, introduced from Europe.

Small to medium-sized, finches have relatively pointed wings and sparrowlike bills. They have notched, short tails and and constantly give calls in flight. 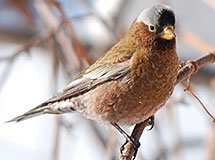 Rosy-finches are the highest-altitude breeding birds throughout most of their range. They are long-winged and generally dull-looking unless seen at close range, when the pinkish hues and combinations of brown, gray, and black can be seen. Their conical bill is usually dark, during spring and early summer and yellowish especially in fall and winter.

These birds usually perch on the ground, but occasionally alight on buildings, trees, bushes, phone, and fence wires. They typically walk rather than hop, but do the latter occasionally. They also swipe with their bill rather than digging with feet as some sparrows and finches do.

The Gray-crowned rosy-finch is a common summer resident at Crater Lake near snow fields in high open areas. Recent breeding has been confirmed at Mt. Hood, Crater Lake, and Three Fingered Jack, with additional summer sightings from Three Sisters, Mt Thielsen, Wallowa Mountains, and Steens Mountain. In fall and winder, they have been found almost annually in the Coast Range on top of Mary's Peak in Benton County.

Hear the song of the Gray-crowned rosy-finch 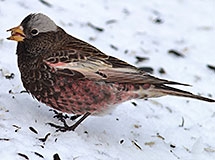 This dark, medium-sized finch with gray and pink highlights is the darkest of the rosy-finches and one of Oregon's rarest breeding birds. It is found in summer in montane areas above timberline, where loose swarms of these birds seem to blow like leaves among isolated cirques, cliffs, and hanging snowfields.

In Oregon it breeds on Steens Mountain and may breed occasionally in the Wallowa Mountains. Winter distribution is poorly known, but birds have been found on the lower east side of Steens Mountain and in the Alvord Desert in winter and rarely in central Wallowa County.

Hear the song of the Black rosy-finch 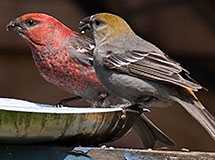 While in Oregon, the Pine grosbeak is tame and not suspicious, usually allowing a close approach as it feeds on buds or dried fruits. The soft-gray females and young males, the latter more or less washed with yellow on the head, far outnumber the rosy males, and observers should look carefully for these duller-colored birds. The song of the Pine grosbeak is often described as similar to the Purple finch, but fuller and with lower pitch. The flight is typically finch-like, but with broad, bounding undulations.

The Pine grosbeak breeds in the Wallowas and is suspected to breed in the Blue Mountains and Cascades. During the summer, they have been observed in small flocks among the spruces, acting like Crossbills or Siskins sitting at the pointed tips of trees to give their beautiful warbling song.

Hear the song of the Pine grosbeak 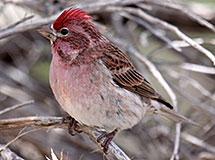 The bubbly warble of this finch is common in western Oregon conifer forests in summer, while its Crossbill-like - but more delicate - pik call is heard in lowland valleys in the winter. Adult males have a distinctly reddish-colored head, face, rump, throat, and breast, broadly but very faintly streaked brownish-pink sides, and a diffused brownish-red nape, back, and wings. Females and immature males have brownish-olive upperparts, wings, and tail, with contrasting streaking. Underparts are buffy-white to off-white with fuzzy, brownish streaking; a dingy pale gray stripe is present above the eye.

In Oregon, the Purple finch breeds west of the Cascades from the Umpqua region southward to Jackson County. It is a fairly common transient and summer resident and winter visitant on the west slope of the Cascades and westward.

Hear the song of the Purple finch 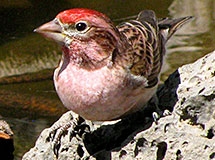 The bubbly warble of this finch is common in western Oregon conifer forests in summer, while its Crossbill-like - but more delicate - pik call is heard in lowland valleys in the winter. Adult males have a distinctly reddish-colored head, face, rump, throat, and breast, broadly but very faintly streaked brownish-pink sides, and a diffused brownish-red nape, back, and wings. Females and immature males have brownish-olive upperparts, wings, and tail, with contrasting streaking. Underparts are buffy-white to off-white with fuzzy, brownish streaking; a dingy pale gray stripe is present above the eye.

In Oregon, the Purple finch breeds west of the Cascades from the Umpqua region southward to Jackson County. It is a fairly common transient and summer resident and winter visitant on the west slope of the Cascades and westward.

Hear the song of the Cassin's finch 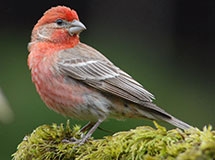 The House finch is the most widespread of Oregon's "red finches." It is a congenial, cheerful singer from urban areas to desert plateaus.

The male has a red forehead, throat, eyebrow, rump and varying amounts of red in the breast. It may have small amounts of reddish wash in its otherwise brownish cheek, hindcrown, nape,and streaked back. In some males, red is replaced with red-orange, orange, yellow-orange or yellow. The female is drab grayish-brown, overall, with indistinct streaking above and no red.

The House finch is a fairly common resident in lowlands, urban, rural, and agricultural areas throughout Oregon. They are distinctly gregarious, especially in winter when flocks can be over 50 birds.

Hear the song of the House finch 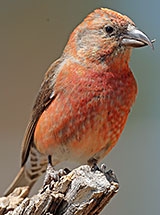 The Red crossbill is aptly named for its unusual bill configuration of crossed upper and lower tips of the mandibles which it uses to pry seeds primarily from native conifer cones. Degree of bill crossing is variable depending on wear, and it can have a right or left cross. Adaption to varied conifer cone structures and sizes has resulted in a diversity in body size, bill size and shape, and palate configurations in Red crossbills.

The Red crossbill is a nomadic and uncommon to common breeder in coastal and montane coniferous forest across Oregon, but it is irregularly detected wherever coniferous stands occur. It is a resident in the moist forests from the Cascade Crest westward and from the east slope of the Cascades east to Warner and Blue mountains, wandering occasionally to western Oregon.

Hear the song of the Red crossbill 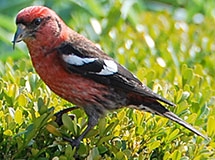 One of the "winter" finches that appear unpredictably in the state, the White-winged Crossbill wanders in flocks year-round searching for food, and may actually be seen in parts of Oregon in any month of the year.

Its peculiar twisted bill, specialized fro prying seeds out of conifer cones, is smaller than that of the Red Crossbill, and it prefers smaller, softer cones, mainly spruce. Males are a dull pinkish red, with distinctive broad with bars on black wings. Females are dusty brown and dull yellow with blurry streaks.

The White-winged crossbill is a very rare and erratic visitor in Oregon. Successful breeding has not yet been confirmed in Oregon. It may occur at any time of year in northeast Oregon, especially in the Wallowa Valley, but also has been reported from the John Day area in Grant County, Langdon Lake area in Umatilla County, and Anthony Lakes in northwest Baker County.

Hear the call of the White-winged crossbill 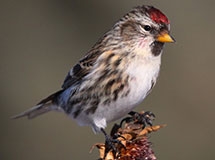 These tiny finches brighten the winter landscape of northeastern Oregon in some years. Their tan and ivory streaked with brown is plain enough, but the red forehead, black chin, and breast suffused in pink add a spot of color to snow-covered trees and shrubs.

The Common redpoll is an uncommon to rare, irregular winter visitor, mainly in lowlands of the eastern Blue Mountain ecoregion. In peak years, this species can be locally common in Union, Wallowa, and Baker counties but in other years, it is essentially absent. It is an irregular visitant to Umatilla and Grant counties and in all of western Oregon.

Hear the song of the Common redpoll 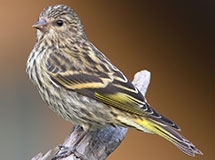 Although a common breeding bird throughout Oregon's mountains, the Pine siskin retains an air of mystery due to its highly nomadic and unpredictable movements and its fondness for the inaccessible conifer canopy.

It is most familiar in winter through early spring when flocks descend to foothills and valleys to feed on alder catkin seeds and many mingle with goldfinches in weed patches and at feeders. It is readily identified by its heavily streaked plumage and by the yellow wing and tail bars that are especially prominent in flight.

The Pine siskin is a generally common resident in conifer forests throughout the state. It may occur as a transient and winter visitor anywhere in Oregon. This siskin is highly nomadic, resulting in unpredictable population levels.

Hear the song of the Pine siskin 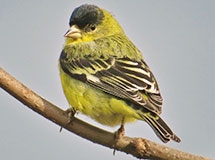 Formerly known as the Green-backed goldfinch, this species was either not present or overlooked during the 19th century by most Oregon ornithologists. The male's black forecrown contrasts smartly with the greenish back and bright yellow underparts. Females lack the clear contrasting colors of the males, though the tips of the secondary coverts and the base of the primaries are white in both sexes. Often the plaintive tee-yee call reveals the presence of the bird long before it is seen.

Hear the song of the Lesser goldfinch 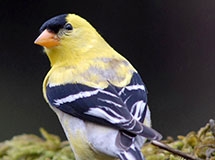 The exuberant bounding flight, musical calls, and flashy yellow and black plumage of the American goldfinch in breeding-season make them one of the most recognized and welcome of Oregon birds. Found in flocks nearly year-round, these goldfinches are a familiar site in riparian woodlands, orchards, weedy fields, and agricultural land.

They are among the last of Oregon's songbirds to nest and are highly nomadic in the nonbreeding season. They may form mixed flocks with Lesser goldfinches and Pine siskins at bird feeders and weed patches throughout Oregon, as well as with Common redpolls some years in northeast Oregon.

Their diet is composed almost entirely of seeds, with those of the sunflower family, particularly thistles, strongly preferred.

The American Goldfinch occurs as a year-round resident wet of the Cascades particularly in the large interior valleys. Very small numbers have been seen in the Cascade and Coast Range mountains.

Hear the song of the American goldfinch 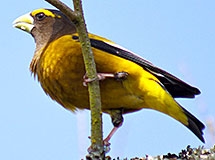 This sturdy-looking bird has a large head, short tail, and massive conical bill adapted for seed eating. The male plumage features bold patches of lemon yellow shading into olive, then brown and black, with white secondaries creating a flashy wing-patch easily seen in flight. The male's bill is chalky white in winter, but changes in early spring to a pale green that matches the new growth at the tips of spruce boughs, where they often nest. Many encounters with this species are of individuals heard flying high overhead, leaving the observer with little else to note.

The Evening grosbeak is an uncommon to common year-round resident. It is not an uncommon sight anywhere in Oregon. In general, this species spend the summer in mountainous forests statewide, breeding in the lowlands of the south Willamette Valley. In spring, this grosbeak may be found in significant numbers around towns and cities of western Oregon. Lowland areas in eastern Oregon may also see minor spring incursions and birds can be found in desert oases during fall and spring. It often moves into lowlands in winter.

Hear the song of the Evening grosbeak 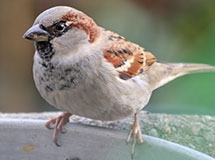 The House sparrow is an invasive species introduced from Europe. No other North American wild bird is so associated with human settlement as this introduced House sparrow. Its foods are nearly all imports, and its nesting and cover requirements are also human-derived. The House sparrow and European starling are the only introduced passerine birds that are thriving in Oregon. These birds can dominate bird feeders and utilize nest boxes that were intended for native species.

The House sparrow can be found statewide around buildings at human developments of adequate size ranging from scattered farmsteads in remote and rural areas to highly populated areas. It is absent to uncommon in the Coast Range and west Cascades and at most mountain resort areas. However, dispersants that have not remained visit small communities.

Hear the song of the House sparrow