Oregon's hoofed mammals include three sub-species of deer, along with moose, elk, goat, and sheep. Otherwise known as ungulates, these animals are herbivores. 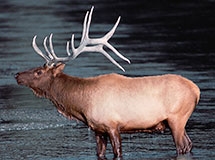 The elk is the largest cervid in Oregon. These heavy-bodied, deer-like mammals have narrow faces tapering to a naked nose pad; relatively small, pointed ears; a heavily maned neck; a back slightly humped at the shoulders, a contrasting rump patch; and a small tail. Pelage color is grayish brown to reddish brown, somewhat lighter among males in winter. The mane is dark brown and the rump patch and tail are cream colored. The underparts (except for a whitish patch between the hind legs) and legs are dark brown to almost blackish.

Adult females, their current offspring, and their female offspring of the previous year form herds that tend to remain within relatively small and distinct areas. Nevertheless, there is considerable overlap in areas used by adjacent herds and there is considerable exchange of individuals among adjacent herds. Leadership of these herds usually is provided by an older female with an offspring, but other females with offspring assume leadership duties at times.

Male elk, especially the larger ones, tend to be solitary most of the year; however, during May and June when antler growth is rapid, males, including larger ones, sometimes form herds. The antlers become polished in July, at which time activity increases as males commence to search for untended females or those tended by less formidable males.

In Oregon, elk occur throughout the state but are most abundant in the Blue and Wallowa mountains and in the northern Coast Range, and least abundant in the southeastern High Desert region. Two of the six recognized races of elk occur in Oregon: Rocky Mountain elk east of the Cascade Range and Roosevelt elk west of the Cascade Range. The former is slightly smaller and lighter colored; it has more slender but longer, less webbed, and more spreading antlers than the latter.

Elk are also known as 'Wapiti.'

ODFW's Living with Wildlife, Deer and Elk has tips on elk fencing and limiting elk damage on your property. You can also learn more about elk hoof disease and chronic wasting disease. 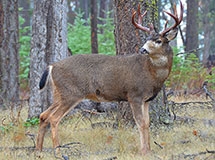 Nearly a dozen subspecies of Odocoileus hemionus are recognized. Of these, two occur in Oregon - the  mule deer and Columbian black-tailed deer, often just referred to as "Black-tailed deer."

Because of the differences in size, color, marking, ecology, and behavior, and because of the voluminous information available for the two races, we decided to treat them separately. Nevertheless, we emphasize that despite these differences, the races readily integrate and produce offspring.

The pelage of the Columbian black-tailed deer is dark reddish-brown, the face is brownish rather than grayish or white, the rump patch is small and does not extend much beyond the tail, and the tail is brownish or black dorsally, white ventrally. The hooves of males are significantly longer than those of females among adults and significantly broader.

Oregon's black-tail deer occur throughout the state west of the Cascade Range. They tend to be secretive and often rely on stealth or concealment rather than speed as a means of escape. Activity periods are influenced strongly by temperature. 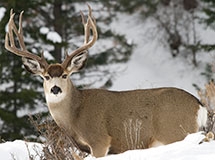 The mule deer is the larger member of the genus in Oregon. The ears are long, the metatarsal gland is surrounded by hairs similar in color but considerably longer than those on the remainder of the metatarsus, and the tail is short and constricted basally.

Among adult males, the antlers are dichotomously branched with tines of approximately equal length. In winter, the basic pelage color is cinnamon buff. The chest is nearly black at the midline grading to grayish on the sides. The nose, sides of face, chin, and throat are whitish to pale buff. Spots of black occur immediately posterior to the nose pad and on the chin midway along the lower lip. The belly and inside of the legs are whitish to tannish. A white rump patch encircles a white tail with a black tip. In summer, the pelage is more reddish brown and the markings are less contrasting and more subdued. Many mule deer exhibit sufficient differences in color and markings to be recognized individually.

Mule deer occur throughout Oregon east of the Cascade Range, and in summer, they range into the Cascades. The deer rest by lying on their chests and bellies with legs tucked under. Mule deer are able to detect danger at long range, and when danger is detected they may hide, move away stealthily, or flee.

Mule deer are gregarious; they form groups of as many as 24, but over 60 percent of groups consist of fewer than five individuals. Except during the reproductive season, most groups consist either of males or of adult females, their young-of-the-year, and female young of previous years. Females tend to remain near natal areas, but males upon becoming independent, often disperse. Among males, dominant individuals usually are those that possess the largest antlers.

In many regions of Oregon, mule deer summer on ranges at higher elevations, then move to lower elevations to spend the winter. 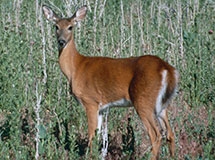 The Columbian white-tailed deer is the smallest cervid in Oregon. The most distinguishing feature is the long, wide tail that can easily be seen, especially when raised when startled.

The tail is brown dorsally with a white fringe, and white ventrally. In males, antlers with tines typically arise from a single main beam. In winter, the pelage is a dark buffy-gray and consists of relatively long, thick, and somewhat brittle hairs; in summer, the pelage is lighter with more tawny tones and is shorter and thinner. The midline of the dorsum is darker and the fade lighter; in males, the patch between the antlers is darker. Pelage markings include white on the venter, throat, muzzle and lower lip, and around the openings of the metatarsal and interdigital glands; a black spot on the lower lip; and a grayish-white eye ring.

White-tailed deer, when flushed, travel by graceful strides interspersed with leaps. During flight, the tail is held erect and wagged gracefully from side to side. In general, white-tailed deer tend to be active crepuscularly, but activity is affected by humidity, barometric pressure, human disturbance and other environmental variables. White-tail deer tend to be gregarious, with groupings usually being matriarchal or fraternal.

White-tailed deer in western Oregon occur as remnant populations in bottomlands in Clatsop and Columbia counties near Westport; on Tenasillahe Island, Clatsop County, on Wallace island, Columbia County, and along the Umpqua River in Douglas County.

The Douglas County population of Columbian white-tailed deer were removed from the federal Endangered Species List in 2003. The Columbia white-tailed deer is an Oregon Conservation Strategy Species in the Coast Range and Willamette Valley ecoregions.

Check our Living with Wildlife, Deer and Elk for tips on living with deer. Columbian white-tailed deer are susceptible to Deer Hair Loss Syndrome and Epizootic Hemorrhagic Disease. 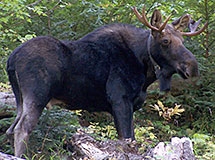 The moose is the largest member of the family Cervidae. The pelage is blackish or dark brownish grading to dark gray or grayish brown on the venter and leg. The muzzle is broad and overhanging, the palmate antlers of adult males are massive, and a "bell" (waddlelike flap of skin on the throat) is present.

The first moose to come to Oregon wandered south from Washington or west from Idaho across the Palouse Prairie. They stayed to establish a herd in the Blue Mountains north of Elgin, and today there are an estimated 50 adults and calves in the area. 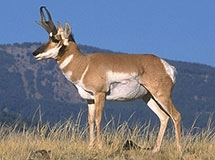 The pronghorn, often called "antelope,"  is deer-sized with relatively long and thin legs and feet with just two digits on each foot, a relatively small tail, and unique horns consisting of deciduous keratin sheaths set on bony cores arising from the fontal bones. Among males, the laterally flattened sheaths are long, branched and recurved, but in those females that possess horns they are short and simple.

The horns and hooves are black. The front feet are larger and carry most of the weight when the pronghorn runs. The pelage is course. The dorsum is a light buff and is separated sharply from the white of the venter that extends high on the sides. Other markings include contrasting black and white throat patches; a black posterior to the nose pad; a white rump patch; and short, dark-brown mane on the nape.

Pronghorns rely on their excellent eyesight and great speed for protection from potential enemies. The ability of pronghorns to discern something new in their environment or detect movement is truly phenomenal. They are intensely curious, commonly scrutinizing any new activity in their area.

They may be active throughout the 24 hour period, but sleep in catnaps at any time. In winter, pronghorns associate in bands or herds sometimes numbering 50 or more individuals. The herd is the basic social unit and tends to maintain the same membership. A linear social hierarchy based on age and body mass develops within herds with adult males at the top, then adult females, and finally young. Large dominant males commence to defend territories in late winter or early spring; bachelor males may be tolerated for as much as a month longer, but not afterward until mid-autumn.

Pronghorn are established in much of eastern Oregon. They are usually considered denizens of open plains, but in Oregon, broad areas dominated by big sagebrush and intermittent lakes seem to form the primary habitats used. 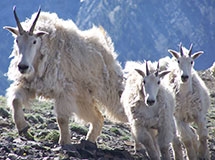 The mountain goat is a stockily built bovid with black scimitar-shaped horns, large black hooves and prominent dew claws, and an entirely white, wooly pelage. Sometimes the pelage contains scattered brown hairs on the dorsum and rump. A long beard, pointed ears, and a squarish muzzle are also characteristic. Males are larger, and have longer, larger-diameter, and more evenly curved horns that females.

Mountain goats are denizens of high altitudes, remote, and barren montane regions where they are capable of moving through exceedingly rugged and precipitous terrain with speed and agility. Nevertheless, mountain goats are known to fall occasionally, whereupon they spread their legs and slide to a stop; by doing so, they often survive bad falls.

Mountain goats shift altitude seasonally and seek shelter of timbered areas to avoid deep snow; nevertheless windswept ridges, blown free of snow, often are used in winter. They do not seem to seek shelter from strong winds, however. Unlike mountain sheep, mountain goats bed at dusk and do not move at night.

The stiletto-like horns of mountain goats can be lethal weapons; however most agonistic social interactions develop no further than intense threat displays. Even when displays fail to elicit the intended submissive response and actual fights ensue, most blows are directed toward the haunches because interacting goats align paralleled, head to opponent's rear. As partial protection from stab wounds, a 'rump shield' of thick skin covers the posterior, flanks, and brisket of males. Adult males, although most heavily armed and armored, are least predisposed to fight, resulting in a social system in which they are subordinate to females and yearlings. 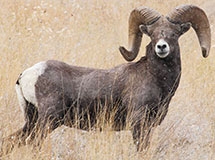 The bighorn sheep is a medium-sized, largely brownish bovid with a white rump patch, muzzle, venter, and rear portion of the legs. The tail is blackish brown on the exposed surface. The hooves are equipped with a rubberlike pad that facilitates negotiating rocky terrain. The ears are relatively small and somewhat pointed. Both sexes are equipped with horns; those of males are massive and spiral outward, whereas those of females are relatively thin, recurved, and mostly directed upward and posteriorly. Horn growth reflects nutritional status.

Bighorn sheep are capable of moving with speed and agility through the precipitous terrain in which they live. Except immediately before and during the rut, they associate in groups consisting either of three-year old males or older or of adult females and immatures of both sexes. Strong dominance relationships are maintained in groups of males, but are weaker in groups of females and immatures. Among males, horn size, body size, and fighting ability determine social status, but among females characteristics that determine status are less obvious.