Oregon has two species of pelicans, American white and the Brown pelican, and three species of cormorants. All are fish-eating water birds with four toes joined by webbing.

Depending on the species, pelicans and cormorants inhabit the Oregon coast, rivers or interior waterbodies.

Types of Pelicans and Cormorants 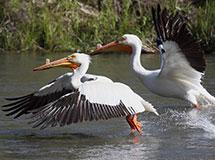 Large and primarily white, the American white pelican has the longest wingspan of any bird in Oregon. It also has an enormous orange bill, and flies with neck withdrawn.

During the breeding season the top of the bird's head becomes dusted with black and a horn grows on the upper mandible; this projection serves as a target for aggressive encounters to avoid injury to the essential bill pouch, but is shed after the eggs are laid.

This pelican makes unusually long flights for feeding and migration, and at great distances, soaring flocks have been reported as UFOs.

In Oregon, it breeds at a few interior sites with differing regularity, including Malheur, Lower Klamath, and Upper Klamath National Wildlife Refuges; Summer Lake Wildlife Area; Warner Basin; and islands in the Columbia River east of Arlington. It is locally common to abundant March through October in Klamath, Lake and Harney counties. Other eastern locations in spring and summer (non-breeding sites) include near Prineville, Crook County; Hermiston, Umatilla County; La Grande, Union County; Richland, Baker County and Vale and Jordan Valley, Malheur County. Postbreeding, this species may occur anywhere in eastern Oregon, particularly at Malheur Lake and reservoirs east of the Cascades.

The American white pelican is an Oregon Conservation Strategy Species in the East Cascades and Northern Basin and Range ecoregions.

Hear the call of the American white pelican 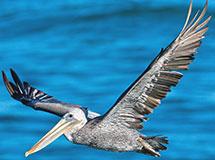 Commonly found along beaches and about estuaries, this large, ponderous bird is a conspicuous member of the summer coastal community, easily recognized by its large size, massive bill, and brownish plumage.

They are common spring, summer, and fall visitors along the Oregon coast. Brown pelicans are an Oregon Conservation Strategy Species in the Nearshore ecoregion.

Hear the call of the brown pelican

Brandt's cormorants nest colonially on offshore islands and mainland cliffs and are the most common of the cormorants on the Oregon coast in summer.

In the breeding season, males are easily distinguished by their intense blue gulag pouches, displayed with a skyward pointing of the bill. They also have wispy white plumes along the side of their head and on their back, which show well against the solid black of the rest of their plumage. In bright light they have a green iridescence. During all seasons they can be distinguished from the two other Oregon species by buff-colored feathers that outline the gular region.

In Oregon, Brandt's cormorant is present all year, fewer in winter than in summer. It is confined mostly to waters within 14 miles of the coast.

Hear the call of the Brandt's cormorant 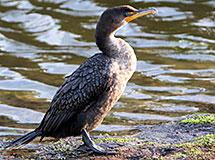 Adaptable and opportunistic, the double-crested is the most abundant and widespread of the three cormorant species found in Oregon, occurring inland and on the coast.

Adults have deep, coppery feathers, bordered in black, that glisten with a green iridescent and offset a rich orange throat atop a long curved neck. The bird earns its name from plumes, ranging from white to black, that crown either side of the head during the breeding season.

The double-crested cormorant is a common breeder in spring and summer at bays and estuaries, and on islands and cliffs along the coast and lower Columbia River.

Hear the call of the double-crested cormorant 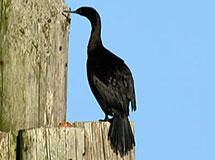 During the breeding season the distinct white flank patches contrast markedly with their black plumage. In bright light the slender neck has a purple iridescent sheen, and the back shines green accenting white filoplumes.

They nest in loose colonies on ledges on vertical cliffs on rocky islands and headlands. It is common year-round along the entire coast and is not found away from salt water.

Hear the call of the pelagic cormorant