This group of mammals is spread nearly worldwide and in Oregon, they are found throughout the state. Oregon is home to the American pika and seven species of rabbits and hares.

Types of Pikas, Rabbits, and Hares 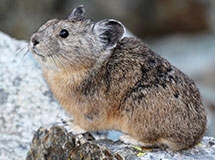 In Oregon, the species is limited to suitable habitats in the Cascade Range and the Wallowa, Blue, Strawberry, Steens, Hart, and Warner mountains, and at Newberry Crater in Deschutes County and Grizzly and Cougar peaks in western Lake County.

The American pika is an Oregon Conservation Strategy Species and is limited by its sensitivity to high temperatures and vulnerable to climate change. 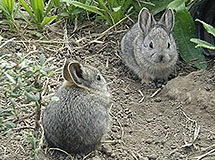 The ears of the pygmy rabbit are short, rounded, and covered with long silky hairs inside and out; the tail is small and covered with hairs possessing wide buffy bands with narrow blackish tips above and below; and the feet are short, densely furred below, and colored a light orangy-buff.

In Oregon, pygmy rabbits have been found east and south of a line connecting Klamath Falls, Fremont, Redmond, and Baker City. This rabbit is closely tied to habitats dominated by big sagebrush.

The Pygmy rabbit is an Oregon Conservation Strategy Species in the Northern Basin and Range ecoregion.

Photo from Washington Fish and Wildife

The brush rabbit rarely ventures more than a few meters from the extremely dense brush that constitutes the requisite component of their habitat. Runways are interlaced through brushy clumps into surrounding grassy areas and are kept clear of vegetation for easy and quick access to and from foraging areas.

In Oregon, the brush rabbit occurs in the Willamette Valley and other interior valleys, in coastal areas, and in valleys along coastal streams from the Columbia River south, and from the foothills of the Cascade Range west. 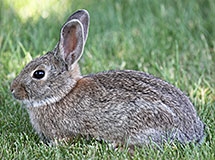 The eastern cottontail is the largest member of the genus in Oregon. Overall, the dorsal pelage is brownish, becoming darker (almost black) on the rump and lighter buffy brown on the flanks; the nape patch is orangy brown without black hairs, and the head is the same color as the dorsum. The hairs on the dorsum have steel gray bases followed by bands of brownish black, buff, and black. The venter hairs are white with gray bases, giving a splotched appearance when the hairs are spread, and the tail hairs are white to the base.

This rabbit was introduced into Benton County in 1937 and into Linn County in 1941 from Ohio and Illinois. From these sites, Eastern cottontails have spread at least through the mid-Willamette Valley. The source of animals in the Portland area is unknown, but it may be from Missouri stock introduced near Battle Ground, WA in 1933.

In the Willamette Valley, coverts occupied by the Eastern cottontail commonly contain large clumps of blackberries interlaced around small white oak, ash and black cottonwood trees and interspersed among grasses and forbs. 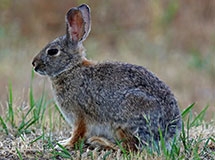 The mountain cottontail is intermediate in size and light grayish-brown in color. Its tail is white and ears relatively broad and rounded.

It is usually associated with rocky outcrops with nearby dominant vegetation consisting of big sagebrush, bitter-brush, rabbit-brush, western juniper and mountain-mahogany.

In Oregon, it occurs throughout the state east of the Cascade Range with a western extension into Josephine County. 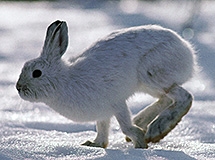 This hare is associated with dense thickets of young conifers, especially those with lower branches touching the ground and especially firs and western larch interspersed with small clearings vegetated by grasses and forbs. 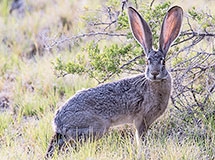 West of the Cascade Range, the dorsal hairs of this rabbit have gray blending to dark-brown or blackish base followed by a narrow band of buff and a black tip. Hairs on the throat, sides, and rump have gray bases blending to buff with short black tips. On the venter, hairs are white with light pinkish-buff tips. The tail is black on the dorsum and dark buff on the venter. The ears are dark buff peppered with black and blending to black at the tip. The feet are mostly white with splotches of buff dorsally. Overall, the coloration is dark buff shading to black on the dorsum. In summer, the pelage is much lighter; black bands on hairs are shorter.

East of the Cascade Range, the light-colored bands on the dorsal hairs are almost white instead of buff and the dark-colored bands are much narrower. The overall appearance of the pelage in winter is similar to that of the summer pelage west of the Cascade Range but are grizzled. The feet are much darker and the dorsal surface of the tail has more black. 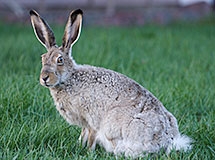 In Oregon, the white-tailed jackrabbit occurs east and south of a line connecting Rufus, Maupin and Antelope, John Day, Juntura, Fields, Fort Rock, and Fort Klamath and Klamath Falls. It is associated with bunchgrass habitats.

The white-tailed jackrabbit is an Oregon Conservation Strategy Species in the Northern Basin and Range ecoregion.