Oregon has one pipit and two species of waxwings.

This group includes the European starling which is considered an invasive species in Oregon.

Types of Pipits and Waxwings 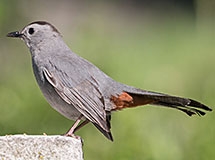 Shadow-colored skulkers in dense riparian growth, catbirds are among the often heard, less frequently seen denizens of northeast Oregon. They are all dark gray except for a black cap and russet undertail coverts. The sound has variable melodious warblings with occasional imitations of other birds and off-key noises. A distinct mewing call is often heard.

Hear the song of the Gray catbird

Hear the call of the Gray catbird 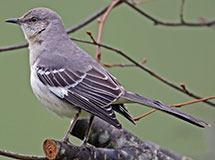 World famous for its loud, persistent singing and mimic abilities, the Mockingbird is highly conspicuous. The white flashes in the wings and tail of this grayish bird identify it in flight.

It is primarily a southern species that has, by taking advantage of the environmental changes brought about by the ever-increasing human population, expanded its range northward in recent years. In many parts of the country it is a familiar bird of residential neighborhoods.

Hear the call of the Northern mockingbird 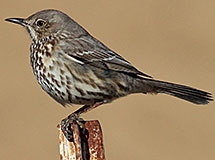 It is often glimpsed darting or running low across the road, tail corners flashing, then disappearing abruptly into the brush. Its aerobatic display flight and tireless vocalizations are its most outstanding features.

Hear the song of the Sage thrasher 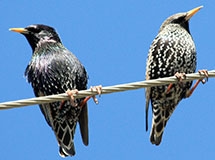 The European starling is considered an invasive species in Oregon. It was introduced from Europe.

They most closely resemble blackbirds, with which they often flock in fall and winter. While both have iridescent plumage, starlings can be told from blackbirds by their two-toned wing pattern - dark upperwing, pale underwing - and during the breeding season by the bright yellow bill.

Starlings adapt readily and quickly to human habitation and are highly efficient and successful breeders. However, the abundance of the bird, the rapidity with which it has spread across North America, and its propensity to cause damage to crops and native bird populations cause the starling to be disfavored by many and remind us of how much damage an introduced species can cause.

They are a common to abundant breeder in urban areas, and locally common in agricultural areas throughout the state where buildings and trees are present.

Hear the call and song of the European starling 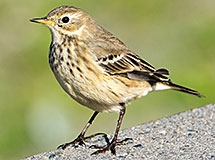 These small, buff ground-dwellers are often seen in migration as they pass overhead in lisping flocks or as they walk deliberately along a muddy shore, tilled field, or short-grass upland with their tails slowly bobbing.

Breeding birds are grayish above and lightly streaked below; winter birds are more heavily streaked below and brownish above. All plumages have cream-buff undersides (brightness varies) and a dark tail with white outer feathers.

The American pipit is locally common in lowlands in winter, especially in western Oregon and on the coast. Hundreds of pipits can be found some years in preferred habitat in the central Willamette Valley and coastal pastures.

Hear the call of the American pipit 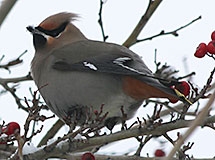 The Bohemian waxwing is a nomadic species, invading locations with fruit-bearing trees or shrubs. Referred to as a "roving band of gypsies," their name reflects this view of their unpredictable and seemingly carefree lifestyle.

Very sociable birds, they exhibit pronounced flocking habits in the winter, and frequently give themselves away with their constant gentle seeping or trilling voice. Their sleek profile and elegant, almost exotic coloration also distinguish these birds.

Hear the song of the Bohemian waxwing 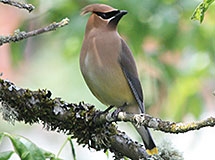 One of Oregon's most efficient fruit-eaters and a perennial irritant to cherry, blueberry, and grape growers, the Cedar waxwing is a sleek, social resident of mixed forests and urban areas throughout the state.

The breeding range of the Cedar waxwing covers most of Oregon, except for the extensive conifer forests and expansive treeless areas with greater breeding populations reported in lowlands.

Hear the call of the Cedar waxwing