Rails, coots and cranes are found in marshy wetlands.

You'll find rails, coots and cranes in marshy areas feeding on plants and small animals. Oregon has two species of rails, one coot and one crane.

Types of Rails, Coots and Cranes 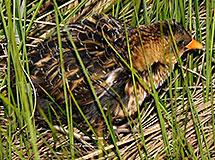 The Yellow rail is a small, secretive rail that is seen and heard far less than any other rail in Oregon. Males vocalize during the breeding season with a five-note tic-tic, tic-tic-tic repeated incessantly during hours of dark, and call infrequently during the day. The call sounds much like two small rocks being tapped together.

Yellow rails are quite small and have a white patch on the trailing edge of the inner wing, more extensive than that on juvenile Soras. Males in the breeding season have a distinct yellow bill and are slightly larger but otherwise sexes are alike. Chicks are downy black and have a pink bill.

The Yellow rail is an Oregon Conservation Strategy Species in the East Cascades ecoregion.

Hear the call of the Yellow rail 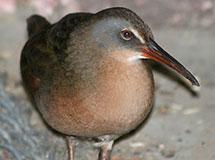 With its long, decurved bill, the black and cinnamon Virginia rail probes the mud for much of its food. Its narrow body is specially designed for slipping through a densely vegetated marsh, so it rarely has to move away from cover. Known for its staccato kidik, kidik call, this rail also contributes grunts, clicks, churs, squeaks, skeeuws, and quack-like noises to the marsh chorus.

In Oregon, this is a rare to locally abundant breeder. In western Oregon it breeds in freshwater and brackish marshes. In eastern Oregon, large marshes in Klamath, Lake, and Harney counties host numerous breeders each year, as do smaller wetland patches. It is also found in small marshes scattered in the midst of wooded areas.

Hear the call of the Virginia rail 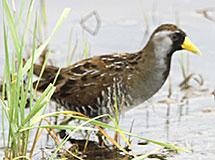 Smaller than a robin, this shy skulker is difficult to see, even though it is present during the nesting season in marshes throughout the state. The Sora is mostly brown with a black face and a stout yellow bill. Its chicks are small black balls of fluff with a bit of orange feathering under their chins.

Hear the call of the Sora 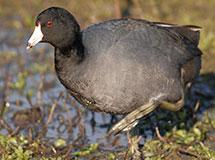 Often mistaken for a duck, the American coot is actually a member of the rail family. It is a smallish, slate-gray water bird with a white bill. At home swimming in ponds and marshes, it seems to propel itself through the water by rhythmically extending its neck.

During the nesting season it can be seen enthroned on a sizable nesting platform built from marsh vegetation. It has the largest Oregon breeding population of any waterfowl. Rafts of thousands of coots stage for migration in spring and fall on lakes throughout Oregon.

Hear the call of the American coot 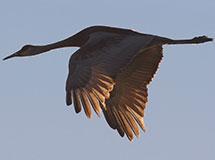 The Greater sandhill crane is Oregon's tallest bird. This large majestic crane has a guttural gurgling or bugling call, and is easily noticed in flight by its profile, with long neck and head extending straight ahead and long legs trailing behind.

The Greater sandhill crane is distinguished by its red crown and white cheek patches, contrasting with with a light gray body. Fledged young resemble adults, but have a feathered forehead, a lighter tawny plumage, and lack the red crown and white cheek patches during their first fall. Fledged young have a squeaky cheap call often heard in flight during fall and winter. Adults look alike, although males are larger than females.

The dancing behavior of cranes is usually associated with disturbance and agitation, and not courtship ritual as so often reported.

These birds breed throughout southeast, south central, northeast and central Oregon in large emergent marsh-meadow wetlands, as well as scattered smaller meadows among the Blue Mountains. A few pair also nest in high montane meadows in the western Cascades. The largest breeding concentrations occur at Malheur National Wildlife Refuge, Sycan Marsh, The Silvies River Floodplain (near Burns), Chewaucan Marshes, Warner Valley, and Klamath Marsh National Wildlife Refuge. In fall, the Sandhill cranes that stage on Sauvie Island are frequently heard as they migrate south over the Willamette Valley. Sandhill cranes are found in an increasing winter population on Sauvie Island.

The Greater sandhill crane is an Oregon Conservation Strategy Species in the East Cascades, Northern Basin and Range, and West Cascades ecoregions.

Hear the call of the Greater sandhill crane