Oregon has one ringtail and the common racoon.

Although these species are quite different, they are both in the same family, Procyonidae.

Types of Ringtail and Raccoon 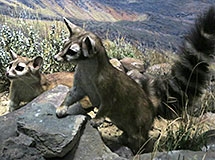 The ringtail is shaped somewhat like a marten with an elongated body and tail of approximately equal length. The ringtail is named for its tail which has has eight dark bands alternating with seven buffy bands.

The dorsum is buff overlain with blackish or dark-brownish guard hairs; the venter is whitish or light buff. The face mask is whitish, but the eyes are fringed with a narrow band of black. The toes are equipped with semi-retractile claws, and except for the pads, furred on the ventral surface. The ears are long and set wide apart on a nearly horizontal plane. The hind foot can be rotated 180 degrees so that the ringtail can descend trees or rocks head first.

Ringtails are strongly nocturnal, but may be active in daylight hours during the reproductive season. Ringtails are superb climbers, often making use of a variety of rock-climbing techniques. Neonates squeak and older young may make vocalizations described as a chuck, chirp, growl, or explosive bark.

In Oregon, the ringtail occurs in Lane, Douglas, Klamath, Jackson, Josephine, and Curry counties. It is an Oregon Conservation Strategy Species in the Coast Range, Klamath Mountains and West Cascades ecoregions. 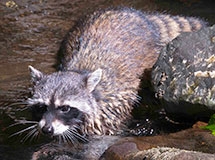 The common raccoon is a moderately sized, heavily furred mammal best characterized by its distinctive markings. The face has a dark brownish-black eye mask sharply separated from whitish nose patches, eyebrow lines, and exclamation points between the eyes. The inside of the ears is ringed with white, adding to the facial contrast. The tail is annulated with five to seven dark rings separated by light gray or tan rings. The hind legs are longer than the front; thus, in a walking gait, the rump is higher than the head.

The common raccoon occurs in suitable habitats throughout Oregon; it does not occur in high mountain regions or in desert regions except near permanent water sources. The characteristics that contribute most to habitats being suitable for raccoons are water and trees. Hollow trees provide dens that serve to insulate the occupying raccoon from inclement weather.

Few, if any, behavior patterns of wild mammals are more widely recognized than the so-called "food-washing" behavior of the racoon. Wild raccoons, in foraging along streams, commonly sit on their hind legs (sometimes in the water), stare vacantly into space, and search for food by "dabbling" with splayed-fingered forepaws.

Common raccoons are notorious for eating pet food left on a porch, or getting into garbage cans for food. Discourage this behavior by keeping pet food indoors and securing garbage cans.

Did you know relocating raccoons is illegal in Oregon? Learn more about how to live with them on our Living with Wildlife, Raccoons page.