Seals and sea lions are commonly seen along the Oregon coast

Types of Seals and Sea Lions 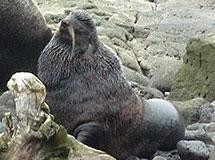 The Northern fur seal is the smallest member of the family in Oregon. The flippers are nearly twice as large as those of a comparably-sized individual of any other species of otariid. The ears are cylindrical and the auditory meatus is covered with wax to prevent entry of water. The pelage consists of coarse guard hairs and an exceedingly thick underfur that serves as waterproof insulation. Adult males are dark gray or brown dorsally and reddish brown ventrally; a grayish cape covers the neck and shoulders. Adult females are grayish brown dorsally and reddish brown ventrally.

The Northern fur seal is restricted largely to the waters and some insular areas of the North Pacific region. In Oregon, it occurs mostly along the northern coast.

They typically feed at night and during crepuscular hours because their prey migrates toward the surface at dark. They generally rest and sleep on the surface during the day, although they may feed if prey is available. 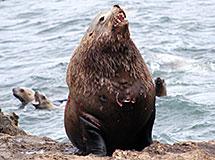 The Steller (or Northern) sea lion is the largest member of the family Otariidae. Among adult females and subadult males, the upper body is slim, whereas in adult males it is heavy and muscular. The head is bearlike with a moderate step between muzzle and forehead. The rear flippers are relatively small and can be turned beneath the body for travel on land. The pelage is light buff to reddish brown, slightly darker in the chest and abdomen. Overall the pelage appears darker when wet. However, beneath the water it appears white, whereas the California sea lion appears black.

In surveys along the Oregon Coast, Steller sea lions were observed ashore at 10 sites extending from the South Jetty at the mouth of the Columbia River in Clatsop County, south to Rogue Reef in Curry County.

The Steller sea lion is gregarious, forming large groups on traditional rookeries and resting areas; at sea it may form rafts of several hundred individuals.

The Stellar sea lion is an Oregon Conservation Strategy Species in the Nearshore ecoregion. 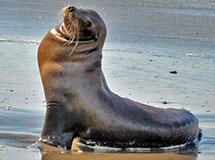 The California sea lion is the mid-sized Oregon otriid. The body is slender and tapering, the flippers are relatively small, and the rear flippers can be rotated beneath the body for moving on land. The short, course pelage lacks dense underfur; when dry, it usually is chocolate brown, but individuals with light-tan pelage are known to occur. The pelage appears black when wet. In older males, the pate is tan.

The occurrence of the California sea lion along the Oregon coast is seasonal. The primary areas where it comes ashore are Cascade Head, Tillamook County; Cape Argo, Coos County; and Rouge Reef and Orford Reef in Curry County, but it also occurs in Yaquina Bay and at Sea Lion Caves in Lane County and on Simpson Reef, Coos County.

Many enter rivers to feed and some individuals migrate far up the larger rivers. These sea lions are superb swimmers and divers. They can stay under water for as long as 20 minutes. 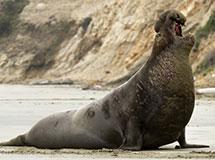 The Northern elephant seal is the largest pinniped carnivore that occurs along the North Pacific coast. The flippers are relatively small, the rear ones directed posteriorly. Its most distinctive feature is the elongated tubular proboscis with a deep transverse cleft among adult males. This proboscis can be inflated and directed into the open mouth to produce vocalizations. Also among males, the neck and chest lose most of their hair and the skin becomes rough and thickened at puberty. The adult pelage consists of course grayish or brownish hairs without any underfur. During the molt, not only is the pelage shed, but the entire cornified epidermis sloughs off in large patches, creating a mottled appearance.

In Oregon, individual elephant seals reportedly were sited ashore south of Bandon and at Simpson Reef, in Coos County. In addition, they have been found at Seal Rock, Depot Bay, and Newport in Lincoln County, and at the mouth of the Columbia River, Clatsop County.

Except for the time spent on the rookery during the breeding season and a month or so ashore while undergoing the molt, the Northern elephant seal is truly a pelagic mammal. They have set records for the deepest dives recorded for any mammal.

The Northern elephant seal is an Oregon Conservation Strategy Species in the Nearshore ecoregion. 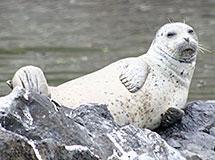 The body of the Pacific harbor seal is plump but tapers to small rear flippers permanently extended posteriorly. The head is large and rounded, the eyes are large, the limbs are short, and the nostrils sit dorsally on the muzzle. The nostrils can be closed when this seal dives. The tongue is notched at the tip. The pelage consists of long overhairs that overlay short underhairs. Markings are extremely variable, but in general the pelage is gray or brownish gray with numerous small spots of black that may coalesce to form splotches.

Pacific harbor seals have been observed ashore at 32 sites along the Oregon coast and in estuaries from the Columbia River to Hunter's Island, Curry County. Most are found along the northern coast. They commonly come ashore on estuarine mud flats, sandy beaches, rocky headlands and offshore rocks and islands.

These seals are solitary in the water, but commonly assemble in small groups of mixed sexes and ages when they come ashore. Some seals move great distances whereas others move little or not at all.

The Pacific harbor seal is an Oregon Conservation Strategy Species in the Nearshore ecoregion.