Only the Western tanager lives in Oregon.

The Western tanager is Oregon's only species of tanager. It lives in wooded habitat throughout the state. 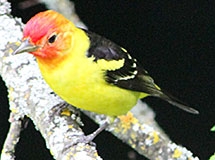 The bright yellow, red, and black plumage of the male Western Tanager, so conspicuous in open situations is very obscure in forested areas where it tends to blend into the shaded foliage. The species perhaps is best known in migration when it visits city parks, orchards, and other open urban and suburban areas. It is attracted to birdbaths but seldom to bird feeders.

It breeds in open coniferous forests and mixed coniferous and deciduous woodlands, primarily in mountains. They usually nest in conifers - rarely deciduous trees - at varying heights, usually well out on a branch, often at the fork of a horizontal limb. The nest is constructed of twigs, rootlets, moss, and coarse grass, lined generally with fine rootlets, occasionally with horse or cow hair. An opportunistic forager of insects, primarily wasps, ants, beetles, and wood borers, it spends most of its time in the canopy of trees or shrubs.

The Western tanager is a widespread summer resident throughout virtually all conifer forests of Oregon, especially Douglas-fir and ponderosa pine. It is a common to abundant migrant that may occur anywhere in the state from alpine meadows, sagebrush and suburban neighborhoods.

Hear the song of the Western tanager