Found throughout Oregon, wrens and kingets have various qualities that make them an interesting group of birds.

Types of Wrens and Kinglets 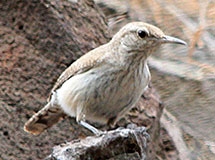 Even in the most barren and desolate reaches of the Great Basin, the cheerful song of the hardy Rock wren will contradict any notion that the desert is devoid of life.

This specialist of cracks and crevices can be found almost anywhere there is exposed rock. One of its most unique features is the mysterious pebble path is constructs from its stone-cave nest to the outside entrance. Drab and pale overall, the gray head and back, white to tawny underparts, and gray tail with buff-tipped corners distinguish this species from other wrens.

Hear the song of the Rock wren 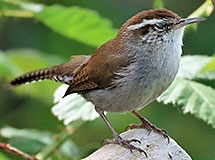 The song of this wren is often mistaken for the Song sparrow in the thickets and open woodlands where it resides. When in view, however, its long tail, thin bill, and white line above its eye are distinctive. Found in a variety of habitats, it readily takes advantage of cleared forest grown to large shrubs, especially blackberries.

It is a permanent resident west of the Cascades, in Klamath and Warner basins, and along the upper Columbia River and tributaries.

Hear the song of the Bewick's wren 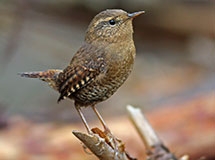 The Pacific wren makes its home in dense coniferous forests with understory thickets where it often forages for insects. This bird was considered the same species as the winter wren but is now separated as its own distinct species.

The Pacific wren is rufous brown above, richly colored below, and barred with a darker brown and dusky. Young birds are distinctly less barred.

It’s most easily found by its sharp kep-kep call and ringing, tinkling song. Males defend territory by singing in spring and in hopes of attracting a mate. 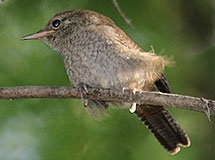 This moderately small wren maintains the frenetic energy that is so obviously typical of this family of birds. It is a summer inhabitant in many parts of Oregon, generally in open woodlands, thickets, and occasionally in residential gardens. The House wren occurs over the widest latitudinal range of any New World passerine.

The House wren nests in a wide variety of native and human-influenced habitats. Nest sites are primarily located within preformed cavities in snags.

It is a very uncommon to common transient and summer resident in semi-open woodland habitats throughout the state. In southwest Oregon, it is most common in oak-chaparral and mixed woodlands of valley foothills and mountains. It is generally uncommon on the west slopes of the Coast Range, except in clearcuts containing snags, where it can be very common.

Hear the song of the House wren 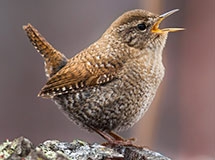 This small, rich-brown wren is only slightly larger than a quarter, and has a tail quite short for a wren. A quiet observer in the forest will see these birds hop in and out and all over logs, snags, shrubs, twigs, and limbs on the forest floor. It has been said that the song of this bird is larger than the bird itself.

The Winter wren breed from Coos County southward and in eastern Oregon in the Blue and Steens mountains. It retreats from high altitudes in winter where snow pack is heavy. Migration probably occurs throughout the state, but movements are most noticeable in spring and fall at locations such as Malheur National Wildlife Reserve where the species does not breed or winter.

During all seasons, Winter Wrens are closely associated with moist coniferous forests, but can also be found in older red alder forests, and in Oregon white oak woodlands.

Hear the song of the Winter wren 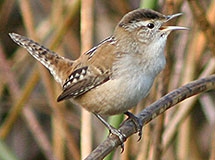 This pugnacious little wren, formerly known as the Long-billed marsh wren, inhabits cattail, bulrush, and other marsh plants. As the only Oregon species of wren that nests over water, it is easy to identify when seen, but sexes are difficult to differentiate in the absence of song due to similar coloration.

This species has long been of interest to behavioral and evolutionary ecologists due to its polygyneous mating system, widespread construction of dummy nests, and the male's complex singing behavior.

The Marsh wren nests statewide in appropriate wetland habitats. It is particularly common during breeding season around Malheur National Wildlife Reserve. Less common breeding populations are found along the Columbia River and in the Willamette Valley, in coastal estuaries and in southern Oregon coastal river valleys.

Hear the song of the Marsh wren 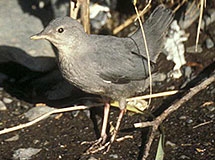 Few birds are as astonishing as the American dipper. This nondescript, dark brown to gray bird is seldom seen more than a few feet from the water's edge. Its elaborate song, which can come forth even on cold winter days, is readily heard above the noise of rushing streams.

This bird's ability to dive into a rushing stream to forage on aquatic invertebrates and reappear in the same location has elicited wonder and excitement from ornithologists, naturalists, and birders as well as envy and adoration from fly-fishers.

It is an uncommon year-round resident in montane streams and rivers throughout Oregon.

Hear the song of the American dipper 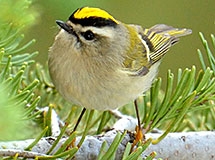 The smallest and hardiest of our resident bird species, Golden-crowned kinglets are remarkable for their ability to survive through severe northern winters when most other small insectivores have migrated to warmer climates. Spending winter nights in a squirrel's nest or huddled together in a sheltered spat are strategies this species uses for winter survival.

Their high-pitched calls ring like tiny bells from the canopy as they flutter among the branch tips in small flocks, searching for insects wintering in conifer foliage and dead leaves.

The Golden-crowned kinglet is very abundant year-round in coniferous forests from the Cascades and west throughout the Coast Range and Willamette Valley.

Hear the song of the Golden-crowned kinglet 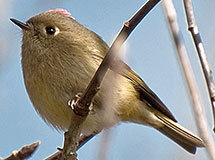 This drab, greenish, diminutive species is similar in appearance to the Hutton's vireo, and sometimes confused with that species in western Oregon. Slighter-billed and smaller than the vireo, this little bundle of energy seems always to be moving as it flicks its wings and hops from twig to twig.

The male Ruby-crowned kinglet sports a bright red crown spot, typically visible only when the bird is agitated, and in spring pours fourth a delightful melody, surprising for such a small, drab bird.

This species breeds in high elevation forests, primarily east of the Cascade crest, where it is common in summer, and in the Blue, Wallowa, and locally in the Warner mountains. It is frequently found late in spring in areas where they do not breed and is found throughout Oregon in winter.

Hear the song of the Ruby-crowned kinglet 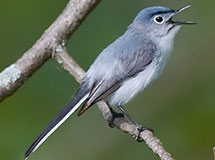 Southern Oregon is the northwest limit of the breeding range of Blue-gray gnatcatcher, which, as its name implies, is an active, diminutive bluish-gray.

This is an energetic bird, commonly jerking its tail sharply to one side, wings held below, occasionally spreading its tail.

It breeds in numerous disjunct localities and may be expanding its range in Oregon. It is an uncommon to common summer resident in the interior Rogue Valley.

Hear the song of the Blue-gray gnatcatcher 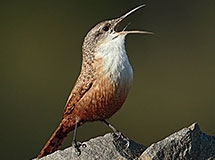 This eloquent wren is admired for its sweet, descending, liquid notes that echo off canyon walls. It is distinguished from other wrens by its gleaming white throat set off by gray head, rusty brown underparts and back, and bright rufous tail.

Appreciated as it is, this is one of our least studied birds in part due to its frequently inaccessible habitat: cliffs, rimrock and deep canyon walls. It is a fairly common but local breeder in Oregon east of the Cascade summit; restricted to rocky cliffs or outcrops. It is more dispersed after breeding season west of known breeding range along the Columbia Gorge, in the Willamette Valley, and the Cascades.