The Winchester Dam was built in November 1890 and is in the National Register of Historical Places. Constructed from large timber cribs, the dam was originally built 4-feet high and in 1907 the dam was raised to sixteen feet. Winchester Dam provided water and electricity for the town of Roseburg until 1923.

In December 1945 a more permanent fish ladder and the first fish counting station on Winchester Dam was built. Two counters working the daylight hours, counted fish that swim over a white board located about four feet below the counter. The ladder was closed when counting was no longer in operation. In 1964, new public and counting windows were constructed in the upper pools of the ladder. These viewing areas were improved again in the 1980’s. Since the fall of 1991 all counts have been conducted from a 24 hour video camera.

The Oregon Department of Fish and Wildlife maintains a fish counting station at Winchester Dam, located approximately 118 river miles from the Pacific Ocean, near the town of Roseburg on the North Umpqua River. Biologists use the fish counts to monitor populations, make management decisions, and recommend angling regulations. A video camera records fish passage, and a technician views the tapes to record species and size, fin clips, and any predator marks. As the technician also has other fish-related duties, fish counts can be one to two months behind. 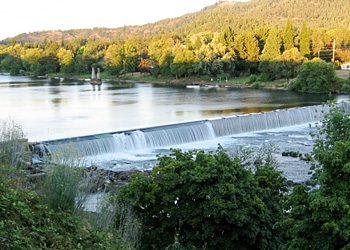