How to fish for steelhead

Steelhead have been called the ultimate game fish. These elusive and challenging fish can test an angler’s patience and persistence, but the reward is hooking into a fish that is famous worldwide for its line-peeling runs and spectacular, acrobatic fight.

For the Oregon angler, there’s an opportunity to fish for steelhead almost every day of the year – from the frigidly cold waters of a north coast stream in January to a sun-baked desert river in central Oregon.

In addition to a fishing license, steelhead anglers need to purchase a Combined Angling Tag (steelhead, salmon, sturgeon and Pacific halibut), and, if fishing in the Columbia River Basin, a Columbia River Basin Endorsement. Anglers also can purchase Hatchery Harvest Tags that authorize the harvest of additional hatchery fish.

When and where to fish

There are two main runs of steelhead in Oregon, known as “summer” and “winter” runs. The type of steelhead run is determined by the season of the year the fish enter freshwater. Some river systems have both types of runs while other streams may have one or the other. Both winter and summer run fish spawn in the spring, but they each enter the river at different times and at different stages of reproductive maturity.

As their name suggests, summer steelhead begin migrating to their natal streams as early as March in some streams near the coast, and as late as October/November in some rivers in eastern Oregon. They will remain in the river for several months before spawning. All steelhead returning to rivers east of the Cascade Mountains are considered summer run fish.

Winter steelhead migrate into fresh water when they are closer to reproductive maturity and are generally larger than their summer-run cousins. Winter steelhead begin their migration in late fall and early winter with some fish continuing to migrate well into spring. Winter steelhead spawn shortly after entering their natal stream.

Unlike the other salmonids, steelhead are not pre-determined to die after spawning and may live to spawn multiple times. After the eggs have been deposited in the spring, the fry emerge in summer and may spend the next one to three years in fresh water prior to migrating to the ocean.

The table below describes the run timing of winter and summer steelhead on some of Oregon’s best steelhead fishing rivers. In addition, the ODFW weekly Recreation Report describes the latest river and fishing conditions for dozens of steelhead rivers in Oregon. 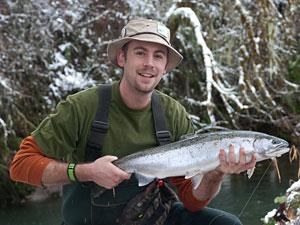 Anglers can choose from a variety of techniques when fishing for steelhead, but regardless of the type of gear used, there are three keys to catching a steelhead:

Bobber and jig/bait - This is a good technique for both bank and beginning steelhead anglers. A weighted jig or bait is tied below a floating bobber and drifted in the current. When the bobber dives, stops or wobbles, set the hook!

Drift fishing – The bait or lure is bounced along the bottom with the help of a significant weight. The key is to keep the bait near the bottom of the water and drifting along at the same speed as the current. Getting a natural presentation and detecting the subtle takes of steelhead make this a difficult technique to master. But its effectiveness makes it one of the most widely-used steelhead fishing techniques.

Plunking – A heavy weight holds bait or a spinner-type bobber stationary in the current near the bottom of a river. This is a great technique when water levels are very high and steelhead are holding or traveling in soft waters near the bank. Good for beginners or anglers with limited mobility.

Spinners – Many anglers are familiar with the cast and retrieve method, but those that master the cast and swing presentation often have better luck with steelhead. This involves casting the spinner slightly upstream and letting if drift naturally in the current and then “swing” toward the bank.

Fly-fishing – A challenging but rewarding technique for targeting steelhead. Anglers use single or double-handed rods to swing flies through the current, or a nymph/indicator rig to drift a nymph near the bottom.

Most steelhead rods tend to be a little lighter and more sensitive than salmon rods. A good all-purpose rod might be an 8 ½ footer rated for 8-12 pound test line with a medium heavy action. Most experienced anglers prefer a bait casting set-up over a spinning set-up.

Of course there also are specialized rods for different fishing techniques (pulling plugs, bobber/jig, fly-fishing, etc.) and if you’re purchasing a rod for steelhead fishing you should consider a number of things:

Steelhead fishing is very popular in Oregon and chances are you’re going to be sharing a run or pool with another angler. A certain steelhead fishing etiquette has evolved that helps create an enjoyable fishing experience for all. Some key elements include:

50 places to go fishing within 60 minutes of Roseburg

Let’s go fishing! not enough time? Think again. If you live in the Roseburg area, there are a number of...

How to fish for surfperch

Surf fishing is one of Oregon’s most underutilized fisheries. There are hundreds of places to fish along Oregon’s sandy beaches...

The north Willamette area includes the Columbia River from Bonneville downstream to St. Helens and the lower Willamette Basin north...