Rockfish must be released when retention is prohibited or when an angler has reached the daily bag limit, but continues to fish for other species. However, releasing rockfish isn’t as simple as just dropping them back into the water. Some rockfish need help to get back down to deeper water to recover from a condition called barotrauma.

Rockfish have a swim bladder, a gas-filled organ that helps regulate buoyancy. The gas in the swim bladder expands when a fish is brought up to the surface, resulting in barotrauma—pressure-related injury. Signs of barotrauma include a swollen body, stomach and/or esophagus protruding into the mouth, and/or distended or bulging eyes (“pop-eye”).
Because of the extra buoyancy from expanded gas, some rockfish with barotrauma may not be able to swim down from the surface on their own—it is like trying to push a basketball underwater.

Use descending devices to release rockfish 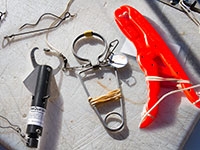 A fish at the surface is highly vulnerable to further injury and predation. This is where you, the angler, can help – a variety of tools are available to return rockfish safely to depth. These descending devices, which range from a simple inverted barbless hook to a pressure-activated clamp that opens automatically at depth, give anglers the ability to return weak or buoyant rockfish to deeper waters, reversing many of the signs of barotrauma and increasing the likelihood of that fish’s survival.

Descending devices (also called recompression devices or release devices) come in a few varieties and are available at many tackle shops or online, or you can make one from a Fish Grip™. Use the device that works best for you and your vessel’s set-up.

To use a simple barbless hook or hook-like device, insert it into the fish’s lower lip, descend it on a weighted line to depth, and release the fish with a sharp jerk on the line. The Shelton Fish Descender is one version.

This is a clamp that releases with a sharp tug on the line after the fish is lowered to depth (for example, Fish Grip or RokLees) or releases automatically at a pre-specified depth (SeaQualizer, for example). Tip: with the Fish Grip device, use heavy rubber bands around the handle to keep the clamp closed securely on the fish’s jaw.

Anglers can request a free descending device from the non-profit Oregon Coalition for Educating Anglers (OCEAN) at http://oceaned.org

The importance of rockfish recompression and descending devices

Recompression is good for fish…and for anglers

Research conducted by ODFW, Oregon State University, and others has shown that even fish with severe signs of barotrauma can recover when safely returned to at least 66 feet deep. Watch this 1 ½ minute video to see a “blown-out” yelloweye rockfish as it descends from the surface to >70 feet before being released and swimming off.

Rockfish are managed under federal and state harvest (or bycatch, in the case of yelloweye rockfish) limits. All dead fish count against these limits—including estimated mortality of released fish. Compared to releasing at the surface, fish released at depth with a descending device have a higher survival rate. Therefore fewer of some species released with a descending device count against the limit as dead. (Currently, fishery managers apply “survival credits” when estimating mortality for only yelloweye and canary rockfish, because these species have been the subject of research documenting increased survival after release. Additional research is underway.) Using descending devices stretches the yelloweye and canary rockfish quotas for the sport fishery further, keeping fishing opportunities for target species such as lingcod and black rockfish open longer.

In addition to barotrauma, exposure to the air also stresses the fish. Keep the air time and handling to a minimum. Have your release device ready, and be as gentle and quick as possible. Hold a rockfish by the lower lip and use wet hands, wet gloves, or a wet towel to avoid removing the protective slime from the fish. Try not to drop fish on the deck. Not every rockfish needs to be released at depth. If a rockfish has no obvious signs of barotrauma, then carefully release it over the side of the boat and it will swim down on its own.

Some anglers may have heard about “venting”, or puncturing a fish’s body or the protruding esophagus to allow gas to escape and the fish to swim down on its own. This is not recommended as it can cause serious injury or introduce infection to the fish. Keeping the fish intact and sending it down below 66 feet gives it the best chance of survival.

Get an A in avoidance

What’s better than releasing at depth? Avoidance. When fishing for non-rockfish species (halibut, lingcod), avoid habitats such as rocky pinnacles and other complex structure. Some species, such as yelloweye rockfish, are highly associated with particular habitats. When you are encountering species you must release, move to another location.
Halibut anglers: two new maps show several soft-bottom areas recommended for halibut fishing with low rates of yelloweye rockfish bycatch.  See maps and coordinates.

50 places to go fishing within 60 minutes of Portland

Let's go fishing! Not enough time? Think again. If you live in the greater Portland area, there are a number of places...

How to clean and keep your catch

A quick guide to cleaning and storing the fish you catch.

Easy angling in the Southeast Zone