Tod's 10 tips for taking toms (in the spring)

Spring turkey hunting is all about attracting a tom to your position by mimicking a hen -- making for a popular and potentially heart-pounding hunt. Here are 10 tips for success.

Get permission early. A lot of turkey hunting can be on private land, so line up a spot or two to hunt before the season starts. Contact landowners ahead of time and establish a relationship with them. Perhaps offer to help them with a project on their property? If you get permission, follow-up with a letter of thanks to the landowner letting them know how much you value and appreciate the opportunity.

Many landowners allow family and friends to hunt early in the season. That’s okay, ask if you can hunt later in the season. There’ll be plenty of opportunity for mid and late season hunts after the early hunters have left. Again, establishing a relationship is key to getting permission for a later hunt.

Scout for birds. Find several places where turkeys frequent. Look for habitat, then for sign. Turkeys love open woods, hillsides and fields. They sleep (roost) in trees at night and spend the day roaming the area looking for food. Springtime forage is usually new growth on grasses and forbs, and insects.

Telltale sign that turkeys are in the area include scratchings, feathers, tracks and droppings. Of course, you might also see or hear them. If you use a call to locate gobblers, avoid casting out a bunch of hen calls. Gobblers hearing hen calls over and over (from you and other hunters) can get leery of a non-existent hen. Instead, use an owl or crow call to elicit a gobble. Another locator call known to work is a good firm slam of the car door.

Take accurate aim. If you haven’t patterned your shotgun, it may not be shooting where you think it is. Pattern your gun by taking several shots at a marked target, and seeing where the shot pattern is hitting in relation to your sight. If you haven’t done this before, you might be surprised to learn your gun shoots high or low, or off to one side. You don’t want to find this out only after finally getting a tom in range, and then either missing, or worse, wounding it.

Also some shotguns are pickier than others and seem to favor certain loads over others, so try a few different ones.

Finally, take some practice shots while wearing your turkey hunting gear and sitting with your back against a tree. This mimics what you’ll be doing in the field when you are about to close the deal on a turkey, and will give you a chance to make any adjustments.

Still your beating heart. Turkeys rely on one sense above all others -- their keen eyesight -- to detect friends and foes. Being totally concealed with good camouflage (including a brimmed hat, face mask and gloves) is a must. However, even the best camouflaged won’t hide movement. It can be hard to sit still if a turkey's approaching and your heart is pounding. But remember, if you can see a turkey, it can see you. Wait until it moves behind a hillside, tree or other cover before you move or change positions. Many a turkey has been spooked by a hunter scratchin’ an itchy nose (especially with an ungloved hand). 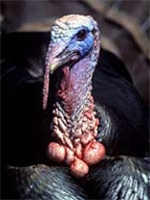 Don’t fly the flag. Never wear red, white or blue while hunting for turkeys. Those are the colors of the tom turkey’s head and he can display them at any time. And you don’t ever want to be mistaken for a tom turkey, especially one that another hunter is looking to tag. Once you’ve taken your tom and are out of the woods, feel free to don the patriotic colors.

Make sure it's a turkey. Assume every turkey call you hear in the woods is another hunter calling a turkey. Making this assumption will make you more cautious about charging after a call you think could be a turkey. 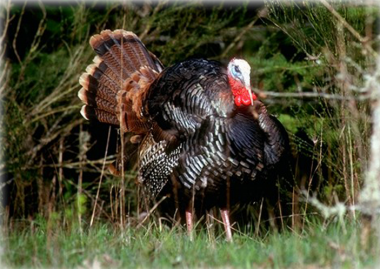 Other hunters may be calling in a bird or may have heard your calls and are calling you back. Chasing calls can lead to disappointment or, at worst, a tragic hunting accident. Closing the distance on turkeys requires a cautious approach. Set up and let the bird come to you.

Move to a new location, re-position yourself and then call when you try to mimic a moving bird. Be on the lookout for movement – is that a bird or another hunter approaching you? If it’s another hunter, call out (without moving), “Hey I’m over here, don’t shoot.” You’ll live to laugh about how you lured in a hunter with your calling skills.

Watch your back. It’s easy to walk along a trail broadcasting calls as you try to find a tom. But it's better to take the time to get set up properly. If possible, find a tree that’s as wide as your shoulders and sit with your back against it. This will protect you in case another hunter doesn’t follow Tip #6.

Get comfortable before calling so you can sit still and quietly for a longer period of time (Tip #3). You don’t want to be fighting the urge to fidget because a root or pine cone is poking your butt (a good reason for a camo seat cushion).  Take the time to pick a spot with a good view of what’s in front of you and to either side. This is especially important if you are using a turkey decoy. You want approaching turkeys to be able to see it, and you want to be able to see other hunters who may be lured by your decoy and calling.

Don't be a bug buffet. Plants grow like crazy on warm, sunny spring days and along with the new growth come the bugs. Turkeys look forward to feasting on fields of grasshoppers. However, other bugs are looking forward to feasting on you. Cancel their dinner plans by applying insect repellent to your ankles, pants, waist, shoulders, wrists and neck area to keep ticks from crawling under your clothes.

While you’re at it, take precautions for poison oak if you’re sensitive to it and you’re hunting in western Oregon locations that have it.

Call less, accomplish more. Resist the temptation to call too much, especially if you’ve got a tom cutting you off with multiple gobbles. Heck, getting a tom turkey to respond to your calling is exhilarating and what makes spring turkey hunting so much fun. But often a greater reward comes with silence. Play hard to get and give him the silent treatment. It may be the deadliest (non)call in your arsenal. Sometimes that turkey will come in loud and fast; sometimes quiet and cautious. Be ready. 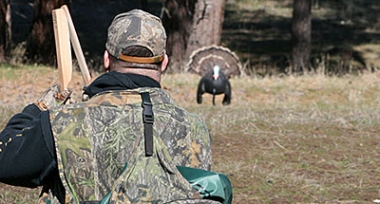 Master one call. If you’re a beginner, get good at using one or two calls. Friction calls (box, slate, push pin) are the easiest to master and have been responsible for many a turkey’s demise. As you get more confident, try using a diaphragm call. These keep your hands free, and let you call without having to move your arms or hands (Tip #4).

There are a ton of calls out there, part of the fun is trying different ones to see which work for you. Luckily for hunters, there is a lot of variation between individual turkey vocalizations. Some birds have squeaky high-pitched calls while others are low and raspy. Whether your pitch is high or low, remember to keep your cadence like a turkey.

One final thought. There are a lot of turkey calling and hunting tips available for binge watching online. More so now than ever before. I remember drawing a tag for an ODFW Spring Turkey Season in White River Wildlife Management Area in 1980. Turkey hunting was so new to Oregon, there were no calls in the local sporting goods store and very little information on turkey hunting. Al Gore hadn’t invented the internet yet so there were no YouTube videos to learn from. I didn’t get a turkey that first hunt but I still remember being out in the turkey woods, hearing the sounds of spring and anticipating a wild turkey encounter at any moment. I remember hearing the sound of a distant gobble at sunrise and it captured my imagination. I was hooked by the gobble, not the gobbler. I learned that one of the best teachers is just getting out there and experiencing it. Be safe out there and have fun!

Don’t forget to take photos of your hunt! Submit them to ODFW and you may see them on the MyODFW.com webpage, in social media, and on signs and publications.

Where to hunt game birds

A beginner's guide to waterfowl hunting on Sauvie Island - hunting in the North Unit. Part 4 of a 5...

Get your permit to hunt goose in the northwest corner of Oregon- part of the Pacific Flyway for migrating waterfowl.

Check out the Recreation Report

Current conditions and opportunities to hunt, fish and see wildlife. Updated weekly by fish and wildlife biologists throughout the state.