Lizards are more like ancient reptiles than either snakes or turtles. There are more than 2,500 species of lizards known in the world and they range from legless, snake-like varieties to the better known, four-legged type with five toes on each foot and scaly skin. Most lizards lay eggs but some give birth to live young. Most eat insects and small animals; some eat plants. Many lizards are very fast and most can swim. Some can even "swim" through sand, just below the surface.

Lizards don't like to be caught and several species will take some pretty drastic steps to get away... like letting their tails break off! Should one of these lizards be caught from behind, its tail will separate from the body, leaving the predator holding a tail that seems to have a life of its own, slapping and wrapping itself all around. With luck, the sacrificial tail will keep the predator occupied just long enough to let the lizard get away, and begin to grow a new tail. Many lizards can let their tails break off numerous times and they will just grow back. In fact, some lizards have been known to break off their own tails and eat them when food was scarce. It's a lizard's sack lunch.

Types of Lizards and Skinks 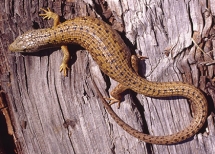 This lizard prefers humid areas, such as the edges of meadows in coniferous forests, and is also found in riparian zones. This is the only lizard found in the cool coastal forests of northern Oregon. 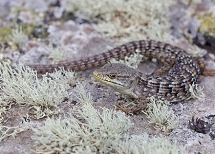 The Southern alligator lizard is found in a variety of habitats from grassland and chaparral to oak woodlands and edges of open coniferous forests, as well as riparian zones and moist canyon bottoms. It requires thickets, brush heaps, downed logs, or rock piles for cover. 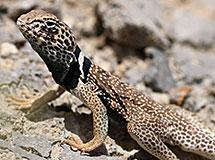 This lizard is found in a variety of desert shrub vegetation types, but is most dependent on the presence of rock outcrops, boulders, or talus slopes.

The Mojave black-collared lizard is an aggressive carnivore that eats a variety of other reptiles and large insects, such as crickets and grasshoppers, as well as some plant material. 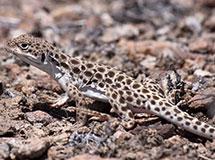 These lizards are found in open desert shrublands, particularly where islands of sand have accumulated around shrubs and are absent where a dense grass understory would inhibit their ability to run. 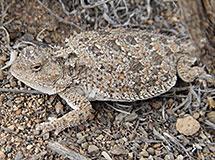 Ants make up a large part of the diet, but beetles, caterpillars, spiders, and sowbugs are also eaten. This lizard burrows into the soil when inactive. 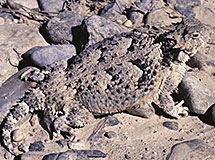 The desert horned lizard is found in flat or gently rolling deserts covered with sagebrush or salt-desert shrub. It prefers areas with scattered bushes and loose, sandy soil, but sometimes occurs in rocky areas or on hardpan. 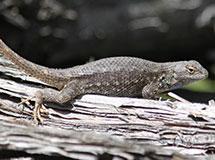 As their common name implies, these lizards are found in sagebrush habitats, but also occur in chaparral, juniper woodlands, and coniferous forests. They require well-illuminated open ground near cover and are primarily ground dwellers.

Also called the Northern sagebrush lizard, it is an Oregon Conservation Strategy Species in the Columbia Plateau ecoregion. 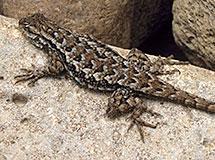 The Western fence lizard occupies a wide range of habitats, from desert canyons and grasslands to coniferous forests. It requires vertical structure in its habitat, such as rock piles or logs. It is absent from dense, humid forests and flat desert valleys.

This lizard is insectivorous, and feeds on crickets, grasshoppers, beetles, ants , wasps, leafhoppers, and aphids. Some spiders are taken as well. 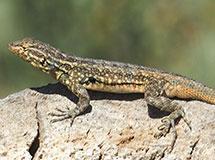 The side-blotched lizard is found in sagebrush, juniper, and shadscale habitats. It is often found on sandy bottoms of washes or canyons, especially in the presence of scattered rocks. 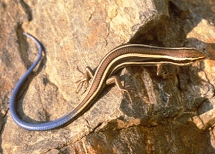 The Western skink is found in moist places such as under rocks or logs in a variety of habitats from grassland and chaparral to desert scrub, juniper woodlands, and coniferous woodlands and forests. Rocky areas with some moisture, such as riparian zones, are favored.

This skink feeds on a wide variety of invertebrates, including beetles, grasshoppers, moths, flies, spiders, and earthworms. 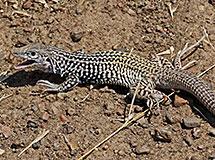 The Western whiptail is found in eastern Oregon deserts and semi-arid shrublands. It is most common in flat, sandy areas and along dry washes.

These lizards are primarily insectivorous. In a food habits study in southeastern Oregon, they ate caterpillars, crickets, grasshoppers, and beetles. They also eat spiders, scorpions, and other lizards. 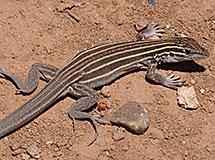 The plateau striped whiptail is a medium-sized, all-female species. Reproduction is by parthenogenesis - unfertilized eggs hatch into clones of the mother.

In Oregon, this lizard only lives in Cove Palisades State Park.