How to razor clam

1) Be in the right place

The 18-mile stretch of Clatsop beaches accounts for 95 percent of Oregon’s razor clam harvest. The razor clam population in this area is much denser than any other area in the state.

2) Be there at the right time

The lower the tide, the more beach will be exposed for digging. Minus tides are best; plan on being there two hours before peak low tide. When the swell is smaller, clams are likely to be closer to the surface making them easier to find and dig.

A razor clam's neck near the surface of the beach produces a distinct “show." Diggers look for shows in a couple of ways: Search for small round dimples, the size of a dime in dry sand or pound a shovel handle in the sand under receding surf to make a razor clam retract its siphon to create the dimple.

Showing: When the tide recedes, razor clams are left below dry sand and often leave a trademark hole, dimple or indentation. This is commonly called a "show."

When a clam eats, it loosens the sand above its neck creating a show. Depending on the size of the clam and how far it is from the surface, the show can look like an open hole in the sand (see picture below) or more like a soft indentation with no hole.

Necking: When razors are feeding, they put out a second siphon to breathe in. This behavior is commonly called “necking."

Necking causes a very small “V” shaped break in the receding surf making it easy to find the clam.

Digging: As anyone who’s dug razor clams can tell you- they dig fast!
Unlike many bay clams that stay in place, razor clams can dig deeper in the sand to avoid birds, crabs, fish or humans. In fact, they can dig to nearly four feet deep!

To do this, a razor clam shoots water out its exhale siphon, which causes the muscles in the foot to contract and expand.

Show pop: Hitting the handle of your shovel on the sand near a dimple in the sand that could be a razor clam "pops" the clam. This causes the indent to cave in and form an open hole, telling you it's a razor clam and not a mole crab, sand worm or other beach creature that burrows in the sand.

Razor clams dig fast so you must dig faster. But dig carefully. Razor clams' shells are easily broken and they aren't called "razors" for nothing.

Digging in dry sand with a shovel
Step one: Insert shovel straight down (6 inches deep) perpendicular to the clam's position in relation to the beach. 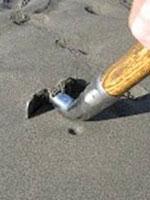 Step two: Push the shovel handle forward using the leverage of the shovel to pinch the clams neck. This inhibits their ability to dig.

Step three: Slide the shovel out while replacing it with your hand. 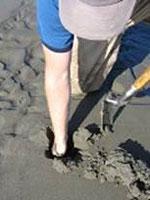 Step four: Carefully find the clam's shell and dig with your hand to remove it. 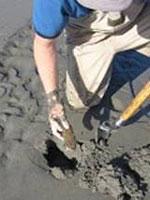 Digging in dry sand with a clam gun or tube
Step one: Place the clam gun so that it is off-center of the show with extra room on the ocean side. Razor clam shows are typically not directly above where the clam is but are angled slightly towards the ocean. 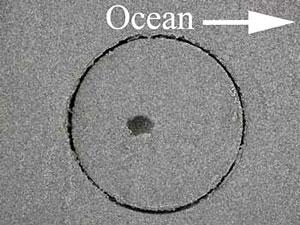 Step two: With the air hole on the clam gun open, drive the gun straight down. 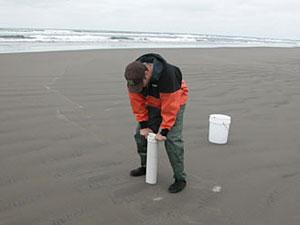 Step three: Place your thumb or finger over the air hole of the clam gun. Lift the column of sand slowly and with your legs. This can be fairly heavy so you'll want to use proper lifting technique. 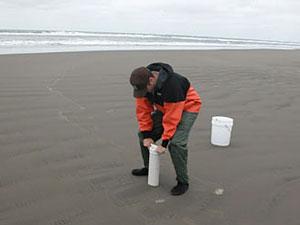 Step four: Move the clam gun away from the hole. Remove your thumb from the air hole and shake the sand out of the gun. 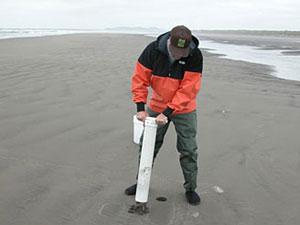 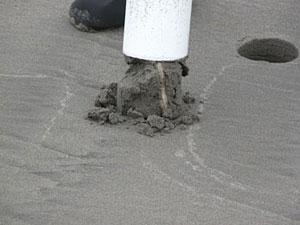 How to clean a razor clam

Many diggers want only big clams and discard or rebury smaller ones. Other clams are broken while being dug and are left in the holes. ODFW has documented incidents of wasting small clams where 30-40 percent of dug clam holes contained broken or small clams. Fully 80 percent of the discarded clams die because they are broken, have their necks cut off, or are improperly reburied.

ODFW regulations call for clam diggers to keep the first 15 razor clams they dig, regardless of size or condition.

How to reduce wastage

What is the pink worm-like creature I found in my razor clam?

This is a nemertean worm (most often Malacobdella grossa) that lives in the siphon or body cavity of the clam. They are occasionally found in older razor clams. The worm's appearance can alarm harvesters but they are not harmful to the clam or the consumer.

Oregon Department of Agriculture (ODA) in cooperation with ODFW and other agencies collects and tests razor clams during most low tide series:

Why does razor clamming close?

Domoic acid -a powerful toxin- is the most frequent reason for razor clam closures. This toxin occurs naturally and is not new to the West Coast. Our understanding of how it interacts with marine organisms is still developing and the focus of ongoing research.

Seasonal closures (July 15 to September 30) on Clatsop beaches are in place to protect juvenile clams, which are most vulnerable at those times.

Can I cook, freeze or cut these toxins out?

No, since the toxin is a chemical it cannot be cooked out like the bacteria found in other meats. Razor clams store this microscopic toxin in many fleshy places within their bodies so physical removal is impossible.

Do razor clams move up and down the beach?

No, razor clams cannot move horizontally along the beach, but they can move up and down in the sand as they adjust to shifting sands, heavy surf and predators.

How long do razor clams live?

Razor clams in Oregon can live five or six years and reach a size of 6-inches. The majority of sport and commercial razor clam catch in Oregon are 2-year-olds.

When are the Washington State beaches open for razor clam digging?

I have a hard time digging clams or cannot dig them at all due to a disability. Is there a permit that allows for someone else to assist me in digging clams?

Yes. ODFW offers an Oregon Disabilities Hunting and Fishing Permit (includes shellfish harvest) for people who have written certification from their physician that they meet certain criteria. Here is the application (pdf). A recreational shellfish license is still required.

Where to crab & clam in Alsea Bay

Just a few miles south of Newport, the town of Waldport (population 2,000) is on the shores of Alsea Bay...

Where to crab & clam in Tillamook Bay

Crabbing can be good year-round but the best catches are in the winter. Tidal flats throughout the bay produce lots...

Where to crab in Oregon

Love the taste of crab and want to try harvesting your own? Already at the beach and looking for a...