Known for catching insects on the wing, flycatchers are found throughout Oregon.

Plumage and structure of flycatchers is so similar that their call is the primary field mark. Oregon has one lark species, the Horned lark that breeds in small scattered populations throughout the Willamette Valley. The Western meadowlark is in a different family and is related to the blackbird, grackle and oriole.

Types of Flycatchers and Larks 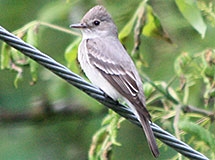 The Olive-sided flycatcher is one of the most recognizable breeding birds of Oregon's conifer forests with its resounding, three-syllable whistle song quick, three beers. It is a relatively large, somewhat bulky, large headed, short-necked flycatcher that perches erect and motionless at the top of a tall tree or snag except when singing or darting out to capture flying insects.

The overall olive-gray plumage is generally nondescript except for a whitish stripe down the breast and belly which gives the impression of an unbuttoned vest, and white patches between the wings and lower back.

This flycatcher breeds in low densities throughout conifer forests in Oregon from near sea level along the coast to the timberline in the Cascades and Blue Mountains. It's an Oregon Conservation Strategy Species these ecoregions: Blue Mountains, Coast Range, East Cascades, West Cascades, and Willamette Valley.

Hear the song of the Olive-sided flycatcher 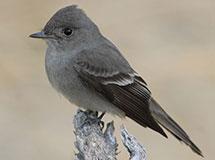 The down-slurred pee-eer call of this flycatcher is one of Oregon's most characteristic summertime bird sounds. Wherever there is a canopy of mature deciduous trees, one is likely to hear the call during warm afternoons when most other birds are silent. Because the call can easily be heard, it can usually be found perched near the tip of a dead branch from which it frequently flies a short distance to capture a flying insect, or to chase an intruder from its territory.

The Western wood-pewee is a common migrant and fairly common breeder statewide in open groves of trees or along forest edges at all elevations.

Hear the song of the Western wood-pewee 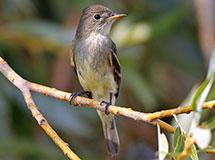 This long-distance, relatively late-arriving migrant to Oregon is associated with shrub-dominated habitats, especially riparian willow thickets. The plumage has subtle tones of olive-green and gray; the species is without a visible eye-ring but the characteristic sneezy, abrupt song reveals its presence.

The Willow flycatcher breeds in western Oregon from sea level along the coast and interior to above 5,000 feet west of the Cascades summit. In eastern Oregon it breeds mostly above 1,000 feet from Klamath to Burns and also Lake County and Union County.

The habitat of breeding Willow flycatchers is characterized by dense shrubs and/or tall herbaceous plants with scattered openings of shorter herbaceous vegetation. Nesting and migratory habitat in eastern and southwestern Oregon is almost exclusively riparian zones, typically willows. In northwestern Oregon, both riparian and upland habitat is used for nesting.

The Willow flycatcher is an Oregon Conservation Strategy Species in the Northern Basin and Range and the Willamette Valley ecoregions.

Hear the song of the Willow flycatcher 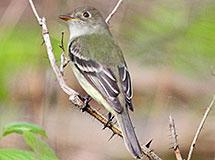 The Least flycatcher closely resembles the Hammond's flycatcher, but its distinctive voice and choice of habitat help to identify calling birds.

It was formerly an unexpected vagrant west of the Rocky Mountains, but since 1981 it has become recognized as a regular migrant and local summer resident in the state.

It is found in deciduous groves along streams and in wet lowlands. It desires a deciduous overstory with at least some low brushy undergrowth.

It is regular migrant and local summer resident in the state of Oregon with the spring migration from May to mid-June. The majority of sightings are from east of the Cascades especially in Harney County. The fall movement ranges from early August to late September with sightings reported from both eastern and western Oregon.

Hear the song of the Least flycatcher 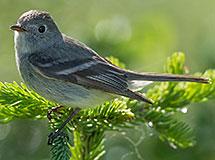 The Hammond's flycatcher spends much of its time in tall conifer canopies, where its subdued plumage and quiet, monotonous chant let it be easily overlooked. A diligent observer may be able to locate this aerial insectivore on a dead limb just beneath the live crowns of mature conifers from which it sallies into a canopy gap to capture insect prey on the wing.

It is a common summer resident of montane coniferous forests through the state, on both sides of the Cascades.

Hear the song of the Hammond's flycatcher 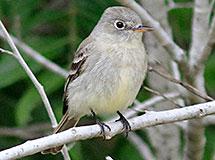 Among the least conspicuous of Oregon's birds, this inhabitant of arid country may be found in pine and juniper woodland and sagebrush shrubland.

A particularly drab member of the difficult-to-identify flycatchers, the Gray flycatcher can most readily be recognized by its downward tail-bobbing motion. Other identification features include its overall gray coloration, its relatively long bill and tail, and a habit of frequently dropping to the ground from low perches in pursuit of food.

It is an uncommon to locally fairly common breeder east of the Cascade summit and rare but annual along the west slope of the Cascades during spring migration.

Hear the song of the Gray flycatcher 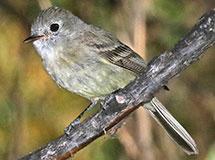 The Dusky flycatcher inhabits open conifers, conifer-hardwoods, or shrubs in the mountains of Oregon.

A medium-sized Empidonax with a small head and rounded crown, the upperparts are grayish olive to grayish brown, the throat grayish, and the underparts mostly whitish with an olive-gray wash (sometimes yellowish). The wings have two narrow, usually whitish wingbars. The narrow white eye ring and pale lores give the appearance of spectacles.

This flycatcher is a common summer resident in most of its breeding range in Oregon. It is found the entire length of the Cascades, but habitat is limited west of the summit in the north.

Hear the song of the Dusky flycatcher 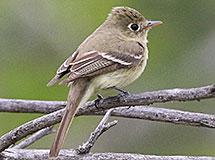 This small greenish flycatcher is easily overlooked in the moist, shady forests where it makes its summer home. It is a common to abundant breeder in forests of the Coast Range and west Cascades below about 4,000 feet and a common transient in western Oregon.

The Pacific-slope flycatcher is most easily detected and identified by voice, but there is incongruence between published descriptions of vocalizations and some birds heard in the field lessens the certainty of identification to species, especially those in eastern Oregon.

Hear the sounds of the Pacific-slope flycatcher

This species generally occurs in drier, higher elevation forests than the Pacific-slope flycatcher and is more closely associated with riparian zones.

Hear the song of the Cordilleran flycatcher 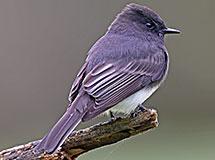 This medium-sized flycatcher has expanded its breeding range from northern California to southwestern Oregon and continues to expand its range in Oregon.

First experiences with the species may bring to mind a Slate-colored Junco behaving like a flycatcher. The Black phoebe is dull, sooty black overall, somewhat paler on the back, with a white belly contrasting with the black breast and sides. Bill, legs, and feet are black. The phoebe dips its tail repeatedly.

The Black phoebe distribution in Oregon is expanding. It is an uncommon to common local resident in the lowands of the Rogue, Applegate, and Illinois River Valleys and tributaries generally below 2,500 feet and in the southern coast lowlands north to the Coquille River Valley and Coos Bay.

Hear the song of the Black phoebe 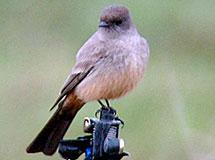 The arrival of this stalwart flycatcher in February prematurely announces spring east of the Cascades.

It specializes in the capture of low-flying and ground-dwelling insects, enabling it to survive harsh conditions. Its near-ground niche allows it to reside from the arctic tundra to the deserts of southern Mexico. Its subtle song and coloration fit in well with the open country it occupies. Although not shy, it is easily passed unnoticed by the casual observer.

The Say's phoebe breeds from the east base of the Cascades eastward in arid, sparsely treed, open country such as sagebrush plains, dry foothills, canyons, rimrock country and dry farms.

hear the song of the Say's phoebe 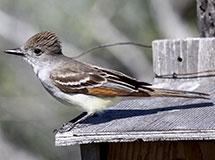 With its erect posture and stately manner, the Ash-throated flycatcher brings a touch of elegance to the oak and juniper woodlands of Oregon.

A medium-sized flycatcher, it has a puffy crest and generally pale coloration, sexes are similar. It has gray-brown upperparts and an ashy gray breast; the throat may appear whiter. Belly and undertail coverts are pale yellow. It has two whitish wing bars, and rufous-colored inner webs of the tail and primaries. Juveniles have more extensively reddish tails.

It is an uncommon to locally common summer resident in the Rogue and Applegate valleys and a rare vagrant in the Willamette Valley. Oregon habitat varies with geographic location, but almost always involves some slope.

Hear the song of the Ash-throated flycatcher 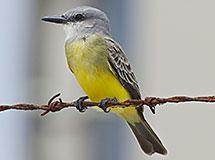 Individuals of this Mexican and South American resident regularly disperse northward in the fall. They occur in good numbers along the California coast, but become steadily scarcer northward.

In Oregon, Tropical kingbirds are most often found in open situations close to the ocean, about an estuary, in pastures, in towns, sitting on a telephone wire or fence line, or on a bare tree branch. The majority of Oregon records occur from late September to late November.

Hear the song of the Tropical kingbird 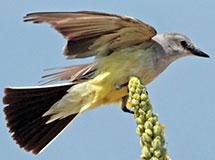 The vigilant Western kingbird is a summer resident of open country known for their fearless and aggressive nature in the nesting season. They are often seen perched on telephone wires, tall trees, fence posts, or any upright structure, surveying the surroundings and sallying out to capture airborne insects. They have adapted well to advancing human settlement and frequently nest on utility poles.

The Western kingbird is a fairly common summer resident east of the Cascades. Range also extends westward through open valleys within the Siskiyou Mountains and into the Rogue and Umpqua valleys.

Hear the song of the Western kingbird 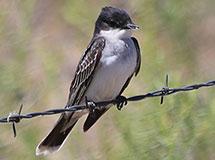 The plumage and perching habits of the Eastern kingbird make it one of the more conspicuous birds in open habitats of eastern Oregon.

The plumage is well defined: black on the upperparts and white on the underparts, and a white band on the terminal tip of the tail feathers. It is a relatively large flycatcher, often perching on powerlines, fences, or exposed perches on trees or snags. They hawk aerial insects during the breeding season.

The Eastern kingbird breeds throughout non-forest of most of northeast Oregon lowlands with spotty distribution in central and southeast Oregon. They are most abundant in irrigated valleys of northeastern Oregon, including Umatilla, Morrow, Wallowa, Union, Baker, and northeastern Malheur counties.

Hear the song of the Eastern kingbird 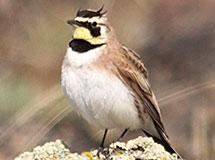 Wide open spaces generally surround these sparrow-sized, ground dwelling birds. The upperparts are mostly brownish and the underparts are generally buffy with varying amounts of yellow on the throat. There is black on the breast and side of the head, but the most unique features are small black "horns." Females and immature birds are duller. Interesting behavior includes aerial displays and "flight songs" during courtship, and the propensity to forage and loaf along dirt and gravel roads.

In western Oregon, it breeds in small, scattered populations throughout the Willamette Valley, with concentrations in the central valley on and near Basket Slough National Wildlife Area and in the Waldo Hills area east of Salem. In eastern Oregon, Streaked horned larks are found in disjunct populations centered on patches of suitable habitat.

Migrant and wintering birds are present throughout the breeding range in Oregon except not above timberline in winter.

Note that the Western meadowlark, Oregon's State Bird, is of the Family Icteridae and is related to the blackbird, grackle and oriole.

Streaked horned larks are an Oregon Conservation Strategy Species in the Willamette ecoregion.

Hear the song of the Streaked horned lark