These carnivores are small to medium mammals.

This group of mammals includes the American marten, fisher, and wolverine which are all Oregon Conservation Strategy Species. 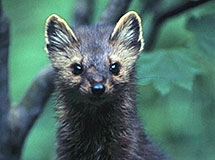 The American marten is weasel-like with a long body and pointy face. The legs are short; the toes, including the pads, are completely furred; and the nails are semiretractile. The tail is bushy and long. The pelage in winter is luxuriant, with a dense underfur and sparse covering of guard hairs. The color varies, but usually is a golden brown shading to dark brown on the feet and tail; the head is lighter. The throat and chest are splotched with orange or yellow. A small dark stripe extends upward from the medial corner of each eye, giving the appearance of a vertical eyebrow.

In Oregon, the marten occurs in the Blue and Wallowa mountains, in the Cascade Range, and to a limited extent in the Coast Range. It seems to be absent from the northern Coast Range, the Columbia Basin, the southeastern high desert, and the Willamette Valley. It is a forest species capable of tolerating a variety of habitat types if food and cover are adequate.

Martens are active year-round, although they may remain in their dens for a day or two during inclement weather. They commonly use elevated perches from which to pounce on terrestrial prey; they also may follow tracks of prey in snow, excavate burrows, enlarge openings to tree dens, and rob bird nests. Martens cache prey or parts thereof and return to consume them later, sometimes within minutes or after a day or so at other times. 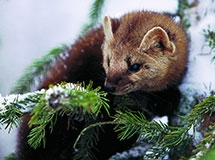 Fishers once occurred throughout the coniferous and mixed forests of Oregon's Coast Range and Cascade Mountains. Currently, there is a native population in the Siskiyou Mountains and an introduced populations in the southern Cascades that remains from ODFW's reintroductions of fishers from British Columbia and Minnesota in the 1960s and 1980s.

Fishers are active year-round, but more active in summer than in winter. They are capable of making extensive movements in relatively short periods, and have the reputation of being fleet and agile. Its ability to prey on porcupines is unique and renowned. 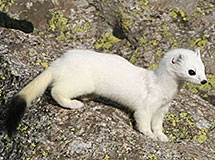 The Ermine is the smallest member of the genus in Oregon. It has a long, cylindrical neck and body and short legs, but the tail is relatively short. The head is flattened and somewhat triangular, the eyes are small and slightly protruding, and the ears are rounded. The summer pelage is brown dorsally, usually white or yellowish ventrally; in some individuals the throat and belly are splotched with brown or are entirely brown. In some populations east of the Cascade Range, ermines replace brown summer pelage with a white winter pelage. The tip of the tail remains black at all seasons, an adaptation to trick raptors into striking short.

In Oregon, most Ermine are found west of the Cascade Range, but a few are found in eastern Oregon. Ermines are active throughout the year. Male and female ermines do not associate except during the breeding season, a period when juveniles remain in nests under maternal care. 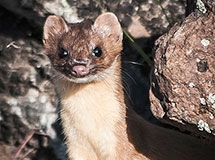 The Long-tailed weasel is the larger of the two weasels in Oregon, but smaller than the other member of the genus, the mink. Males are considerably larger than females. The head is flattened and somewhat triangular; the body and neck are elongate and almost cylindrical; the legs are short, and the tail is long. The summer pelage is brown dorsally; the venter is yellowish to orangish except for a white chin and sometimes one or more scattered brown spots. The tip of the tail is black. The pelage is molted twice annually. In the Cascade Range and eastward through the remainder of the state, the winter pelage often is white although in parts of the region some individuals may remain brown in winter. This species occurs throughout the state.

Long-tailed weasels are active throughout the year. Although they sometimes are considered to be nocturnal, they are often active during the daylight hours. Weasels can swim and climb but they mostly hunt on the ground. When snow is on the ground, they often seek prey by burrowing beneath the snow. 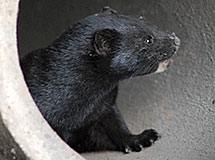 The Mink is a semiaquatic species. The body is elongate and cylindrical, the legs are short and stout, the tail is bushy and about half as long as the head and body. The head is flattened, the ears small and rounded, and the nose is pointed. The pelage consists of dense grayish underfur and long lustrous guard hairs. Dorsally, it is dark brown to blackish but somewhat lighter on the venter.

In Oregon, the mink is found throughout the state and is associated with river, lake, pond, or marsh environments. They forage along overhanging banks, and in holes and crevices. They also peer into the water, quickly diving when they sight prey. 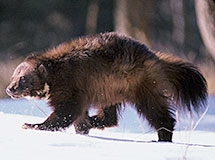 The Wolverine is the largest terrestrial mustelid in Oregon that, to some degree, resembles a small bear.

It is powerfully built with a broad, dog-like head; short round ears; small eyes; a slightly humped back; relatively short legs and a bushy, somewhat drooping tale. The pelage consists of a dense, wooly, crimped under fur overlain by course, stiff and somewhat shaggy guard hairs. Fur on the tail is about twice as long as on the body. The base color is blackish brown with a pale brown stripe extending along the sides from the head or shoulders to the base of the tail. Lighter markings often produce a face mask. The throat and chest are splotches with yellowish white, and a ventral gland is marked with a narrow streak of white.

In Oregon, Wolverines have been found on Three-fingered Jack in Linn County, on the Steens Mountains in Harney County, Broken Top Mountain in Deschutes County, and in the Eagle Cap Wilderness Area in the Wallowa Mountains of northeastern Oregon. More recently it was confirmed in Wallowa County, as well.

Wolverines do not hibernate, but may be inactive during inclement weather. Activity is greatest at night, but where wolverines are relatively common, sighting a wolverine during daylight hours might be expected.

The Wolverine has a reputation for having a mean and savage disposition; the reputation likely derived from observations of individuals caught in traps or in cages. Trapped or caged individuals can exhibit defensive aggression unmatched by most other species in similar circumstances. They are powerful animals that often can escape from traps, can tear into buildings or food caches, and can kill even the largest cervids.

The Wolverine is an Oregon Conservation Strategy Species in the Blue Mountains ecoregion. 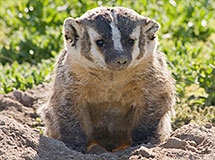 The American badger is a medium-sized, powerfully built carnivore strongly adapted for digging. The body is flattened and the legs are short but stout; the toes of the forefeet are partly webbed and equipped with long, curved claws; the hind feet are shaped like miniature shovels; and each eye is equipped with a membrane that can be extended to cover it. The ears are rounded and densely covered with fur but seem large in comparison with those of many digging mammals. The tail is short and brushlike. Dorsally, the long, shaggy pelage is mottled grayish blending on the venter to light tannish or whitish. A white stripe extends from the nose pad to the shoulder, and may extend to the rump. The face is black with white splotches surrounding a black "badge" on either cheek. Badgers molt annually.

In Oregon, American badgers occur thoughout the region east of the Cascade Range and in eastern Jackson County wherever prey is abundant. They are largely nocturnal but occasionally may be seen abroad during daylight hours. 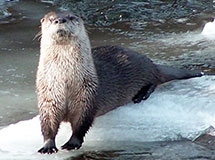 The River otter is adapted for both terrestrial and aquatic environments. The heavily muscled, somewhat cylindrical body is thickest at the thorax and tapers posteriorly to a thick, flattened tail. The body tapers to a blunt and slightly flattened head. The legs are short and powerful; and the toes are webbed. The eyes are small, forwardly directed and set high on the head. The underfur is grayish, short, and dense, and overlain by longer, stiff and shiny guard hairs. The dorsum is brown and the venter a lighter brown or tan; the lower jaw and throat are whitish.

In Oregon, River otters are mostly found west of the Cascade Range but have been found in eastern Klamath County and in Deschutes, Wallowa, and Malheur counties. The River otter is associated with river, lake, pond or marsh habitats, but may make extensive overland excursions from one such habitat to another.

River otters are considered among the more social members of the mustelidae family. In addition to the adult male-female association during the breeding season and the maternal female to young association, a variety of groupings of otters in different sex and age-classes have been observed. 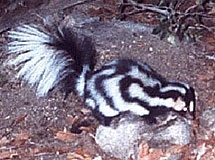 The Western spotted skunk is smaller and more weasel-like than the Striped skunk. The pelage is black with a somewhat pentagonal white patch between the eyes, a round white patch on each side of the head and four or six segmented white body stripes. This skunk is endowed with a muscle-encapsulated musk gland similar to those of the Striped skunk and so similarly, can eject musk from two papillae located under the tail. The odor of the musk is considered somewhat more pungent or acrid but is less spreading than that of the Striped skunk.

In Oregon, this skunk occurs throughout most of the state but it is believed not to occur in most of the Willamette Valley. It does not hibernate, but tends to be less active during periods of unusually cold weather. It is primarily nocturnal and highly secretive. Although equipped with a superb defense system, the Western spotted skunk tolerates considerable disturbance before resorting to the use of musk. 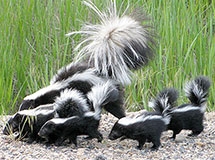 The Striped skunk is about the size of a house cat with a pointed head; slightly upturned, nearly spherical nose pad; and beady black eyes. The pelage is entirely black except for a narrow white stripe on the forehead and nose, a white pate leading to two diverging white stripes on the back that extend partly or completely to the rump. Entirely white skunks, or skunks with the black replaced by seal brown or the white replaced by yellow are also know to occur.

Without doubt, the most widely recognized characteristic of the Striped skunk is the pungent odor of the musk that it produces. A muscle-encapsulated gland positioned under the tail produces a liquid that can be expelled.

It occurs in suitable habitats throughout Oregon, except in higher elevations, usually in more open habitats.

Striped skunks tend to be docile and unobtrusive; except during breeding season or when infected with rabies, they are not aggressive or belligerent. In winter they often den communally.