For your safety, call the Oregon Department of Agriculture Shellfish Safety Hotline before harvesting any shellfish at 1-800-448-2474 or check their website.

Other Clams (softshell, piddocks and others not listed)

Please check the sport fishing e-regulations Marine Zone for all the shellfishing limits and laws.

Crabbing in the Northwest Zone

You can crab by boat, dock, or shore in the northwest zone. There are areas in several bays to drop a crab pot, ring, or baited line and pull up Dungeness or red rock crab.

Razor clamming in the Northwest Zone

Razor clams (Silqua patula) are found throughout Oregon’s ocean beaches. Clatsop beaches have the most stable populations. Other area’s such as, Agate Beach, Waldport Beach, Whiskey Run, Myers Creek and other beaches along the coast also have razor clam populations, but tend to be less available.

Bay clamming in the Northwest Zone

Oregon estuaries are rich with many species of clams, although only a few of these species are commonly harvested. Gaper, butter, cockle, littleneck and softshell are primarily harvested due to their abundance, size and taste.

Alsea Bay: Just a few miles south of Newport, the town of Waldport (population 2,000) is on the shores of Alsea Bay. It is one of Oregon’s estuaries that does not have jetties at the ocean entrance. Strong outgoing tides and ocean swell can make boating near the mouth of the bay more dangerous. Use caution and be prepared if you crab in this area.

Clatsop beaches: Clatsop is Oregon's most northwestern county. 95 percent of Oregon's razor clam digging occurs on the beaches between the Columbia River mouth and Seaside Beach.

Nehalem Bay: Nehalem Bay is located on Hwy 101 60 miles north of Lincoln City and 40 miles south of Astoria. It is surrounded by the towns of Manzanita, Nehalem and Wheeler. 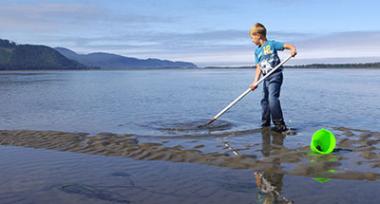 Netarts Bay: A boat basin is located in the town of Netarts at the north end of Netarts Bay Drive. The jetties around the boat basin also offer some bank crabbing using rod and reel set-ups.

Siletz Bay: Siletz Bay, located at the south end of Lincoln city, is a very popular destination for beach-goers and clam diggers.  Some of the highest density purple varnish clam beds are easily accessed here.  Its proximity to the ocean also makes it a very productive seasonal crabbing area.

Siuslaw River: The Siuslaw river runs past the city of Florence and then flows for 4 miles to the Pacific ocean. Areas west of the 101 bridge feature excellent seasonal crabbing and even some good diving.

Tillamook Bay: Tillamook is known for having it all, including shellfishing!