For your safety, call the Oregon Department of Agriculture Shellfish Safety Hotline before harvesting any shellfish at 1-800-448-2474 or check their website.

Please check the sport fishing e-regulations Marine Zone for all the shellfishing limits and laws.

Other Clams (softshell, piddocks and others not listed)

Crabbing in the Southwest Zone

You can crab by boat, dock, or shore in the southwest zone. There are areas in several bays to drop a crab pot, ring, or baited line and pull up Dungeness or red rock crab.

Razor clamming in the Southwest Zone

Razor clams (Silqua patula) are found throughout Oregon’s ocean beaches. Though they are primarily found in the northwest zone, they can be found on the shores of Agate Beach, Waldport Beach, Whiskey Run, Myers Creek, and others.

Bay clamming in the Southwest Zone

Oregon estuaries are rich with many species of clams, although only a few of these species are commonly harvested. Gaper, butter, cockle, littleneck, and softshell are primarily harvested due to their abundance, size, and taste. 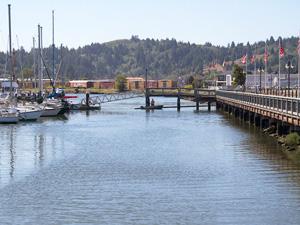 Coos Bay: Coos Bay is Oregon’s largest bay. The lower bay (areas from the ocean entrance to the airport) is “marine dominated”, meaning there is little freshwater influence, and offers some of Oregon’s most productive shellfishing opportunities. In 2008, extensive research was conducted by ODFW's shellfish program on the clam populations of lower Coos Bay.

Coquille River: The areas around Bandon, on the Coquille River, have productive softshell beds. The areas near Bandon Marsh, National Wildlife refuge tend to be the most popular. Populations of other bay clams may be found close to the jetties but are mostly subtidal.

Umpqua River: Umpqua River is one of Oregon's largest estuaries, however, high freshwater influence makes the bay seasonal for crabbing. Softshell clam populations in the Umpqua river are among the highest in the state and they are big clams.

Port Orford: The oldest town on the Oregon coast and the most westerly in the 48 states.

Gold Beach - Rogue River and Brookings (Chetco River): Dungeness crab, razor clams, and butter clams can all be found along the coastline of Gold Beach.

Can lead to fast fishing for hot fish

Where to crab & clam in Alsea Bay

Just a few miles south of Newport, the town of Waldport (population 2,000) is on the shores of Alsea Bay....

Where to crab & clam in Tillamook Bay

Crabbing can be good year-round but the best catches are in the winter. Tidal flats throughout the bay produce lots...

If you love Dungeness crab, you’ll love that you can harvest them yourself.